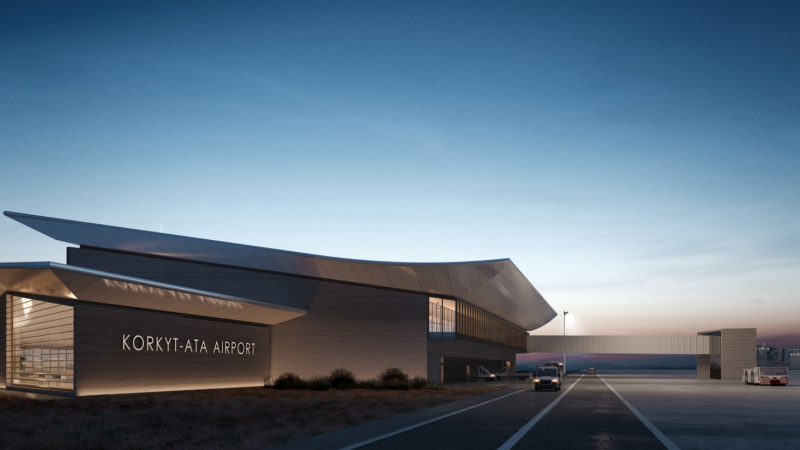 The Bulat Utemuratov’s Foundation presented a project of a new passenger terminal of Korkyt Ata airport. The estimated cost of the project, which is being implemented by the Verny Capital Group, is about USD 25 million. Upon construction completion, the facility will be transferred to the communal ownership of the city free of charge.

According to Yerlan Ospanov, General Director of the Verny Capital Group of Companies, it is planned to start construction in February 2023, and the new terminal will be able to accommodate the first passengers in September 2024.

“Verny Capital has solid experience in design and construction of socially significant facilities and public spaces. The new airport terminal will meet the best international practices and will give impetus to the development of the entire region,” Ospanov said.

The total area of the two-story terminal with stained glass facades made of tempered glass will be 7,500 square meters. The international and domestic flight zones will be able to accommodate 130 and 160 guests, respectively. A jet bridge, escalators and elevators, an automated luggage conveying and handling system, a hall for transit passengers and a CIP hall are provided for in the terminal. The new building will have self-check-in counters, prayer rooms, a Duty Free zone, as well as specialized spaces for employees of border and customs services, phytosanitary and veterinary services, sanitary and epidemiological control and transit police department. Equipment, technologies and design materials of international brands will be used in the construction.

“The airport is the main gate of the region, one of our key facilities. The attitude of guests arriving in our city is formed based on the appearance of the airport, the level of comfort and quality of service. The construction of a new, modern airport terminal is a very relevant and expected solution. On behalf of all residents of the region, I express my gratitude to the Bulat Utemuratov’s Foundation for its valuable contribution to the development of the air transport complex of the Kyzylorda Region,” said Nurlybek Nalibayev, Akim of the Kyzylorda Region.

The renovated passenger airport project complies with the current standards of the International Air Transport Association (IATA) and the International Civil Aviation Organization (ICAO). Its author is GMW Mimarlic, the Turkish design company, which has 20 years of experience in designing airports in the Netherlands, Russia, Turkey and the Gulf countries.