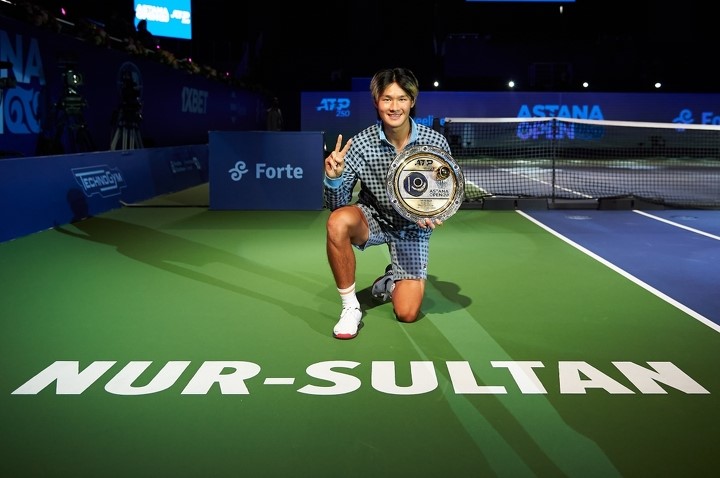 Tennis player from South Korea won the second historical victory for his country at the ATP level tournament.

An Astana Open men’s tournament of the ATP series was held in Nur-Sultan from 19 to 26 September. It is quite new on the calendar of the men’s professional tour – it has been held since 2020, but has already established itself as one of the most hospitable and excellently organised events. All competition participants speak warmly of the level of refereeing, the state of hard courts and change rooms, and organisers and fans.

Like last year, the tournament was attended by four Kazakhstani players, but if in 2020 the best result among compatriot tennis players was them reaching the quarterfinal (Mikhail Kukushkin), then in this season our athletes moved one round further, making it through the semifinal. Anyway, first things first.

Kazakhstanis Timofey Skatov and Mikhail Kukushkin got wild cards from the organisers, and just one of them managed to make good of this. Timofey Skatov went into the second round having beaten honoured Italian Andreas Seppi in a three-hour match with a 7:6, 4:6, 6:1 score. Nevertheless, he did not manage to go into the quarterfinal – Timofey’s path was barred by Belarusian Ilya Ivashka who outplayed our compatriot 6:2, 6:3. Mikhail Kukushkin lost the very first match to Australian James Duckworth 6:7, 1:6.

The third participant from Kazakhstan was Dmitry Popko who broke into the main draw from the qualification, but he too couldn’t pass through the opening round – he gave way to last year’s winner John Millman from Australia 6:3, 1:6, 4:6.

Kazakhstan’s No 1 Alexander Bublik, having the best season in his career, was seeded second at the tournament and therefore missed the first round of the competition, having started playing from the 1/8 final. In his first match, he broke the resistance of Miomir Kecmanovic from Serbia in three sets – 1:6, 6:3, 7:5. In the quarterfinal, he beat Spaniard Carlos Taberner 6:3, 6:4. And only at the semi-final stage, he met with the future winner of the tournament – Soon Woo Kwon from South Korea, and here he could no longer outplay his opponent, who caught the rhythm – 6:3, 5:7, 6:3.

“He (Soon Woo Kwon – F) did not expect such performance from himself. That’s what he told me himself at the net. Let’s say, sort of humorously apologized, saying that he had never played like that, and there is really nothing to add here. The man played the whole match at some magnificent smooth level. The fact that I won the first set is rather a fortunate coincidence, because I was just lucky when I twice made it to the suspension cord. I dominated the game in past matches, but in this meeting, even though I filed for 30 aces, I was constantly forced to fight back to him. He is a nice fellow, he showed excellent tennis. If he continues playing like this, he will stand much higher than he is now,” said Alexander Bublik after the match.

And indeed, the tournament in Nur-Sultan became a glory hour for the South Korean tennis player – he was steadily moving to the final, having had just one three-set duel, and managed to defeat Australian James Duckworth just in an hour and a half in the finals – 7:6, 6:3.

For the 23-year-old tennis player, this victory was the first in his career at an ATP-level tournament. The 250 points won allowed the athlete to step up in the ranking by 25 lines at once – from the 82nd to the 57th line.

“It’s my first ATP 250 that I won, and I am very much excited now. Great credit and my congratulations to James. He spent a tremendous week and I wish him luck in future. Many thanks to all organisers, linesmen, supervisors, ball boys, staff. Deep gratitude to the sponsors and to the President of the Kazakhstan Tennis Federation for your incredible hospitality. This was one of the best ATP 250 in which I took part. I shall definitely be back next year and will delight you with my new victory,” said the winner during the awards ceremony.

By the way, for the last year’s winner of Astana Open, John Millman from Australia, the triumph in this competition has also become the first one in his professional career, and one can say that the ATP level metropolitan tournament becomes for young players a real window on the big tennis.

The duo of Mexican Santiago Gonzalez and Argentinean Andres Molteni won in the final of the doubles defeating Jonathan Ehrlich (Israel) / Andrei Vasilevski (Belarus) with a score of 6:1, 6:2. The successes of Kazakhstanis in this tournament draw were very modest – only a pair of Aleksandr Nedovyesov / Andrey Golubev managed to get into the second round.

Note that on Sunday 26 September the WTA 250 Astana Open 2021 kicked off – the women’s professional tournament, in which the strongest Kazakhstani tennis players will take part: Yuliya Putintseva, Anna Danilina, Zarina Diyas and Zhibek Kulambayeva. The country’s No 1 player Elena Rybakina will not be able to participate in the home tournament due to disruptions in the tournament schedule.