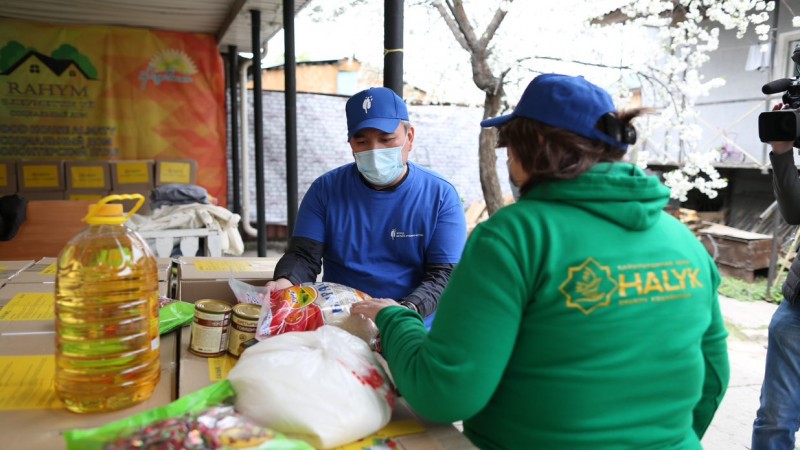 4 000 food baskets formed by Bulat Utemuratov’s Foundation will be delivered to residents of the most densely populated cities of the country: Nur-Sultan, Almaty, Shymkent, and to Kyzylorda city.

Grocery baskets will be delivered to low-income multi-child families and families that are upbringing children with special needs. Lists of these families were formed jointly with the regional akimats (administrations), and the delivery of baskets is performed by volunteers.

“The “El tiregi – Elbasy” (translated from Kazakh “The pillar of the nation – its leader”) campaign became a real sample of unity, engagement and kindness of our compatriots. More and more businessmen, companies and caring Kazakhstanis are joining the campaign. Today, thanks to assistance rendered by Bulat Utemuratov’s Foundation, some more 4,000 families will get grocery baskets,” reads the address of Dinara Kulibayeva, the Chairwoman of the Board of Trustees, Halyk Charity Foundation.

“We are happy to participate in the “El tiregi – Elbasy”campaign and to provide support to families that found themselves in a difficult life situation amidst the pandemic and quarantine restrictions. At present, more than ever, our society should stick together and help those who is in the most need because only doing so we will be able to overcome all hardships,” noted Marat Aitmagambetov, Bulat Utemuratov’s Foundation Director.

The “El tiregi – Elbasy” campaign started on 17 March.  The campaign was initiated by the Halyk Charity Foundation that gave over 15,000 grocery baskets to the families in need. The campaign was backed by prominent businessmen and companies – their assistance helped to deliver some more 16,000 grocery sets to various regions of the country.

In total, as part of the campaign, more than 35,000 families received grocery sets, over 1.7 million kilograms, more than 50 kilograms of food for each family.

The Halyk Charitable Foundation plans to hold the “El Tiregi – Elbasy” campaign repeatedly throughout 2021 and calls on representatives of the business community and other charitable organisations to join.