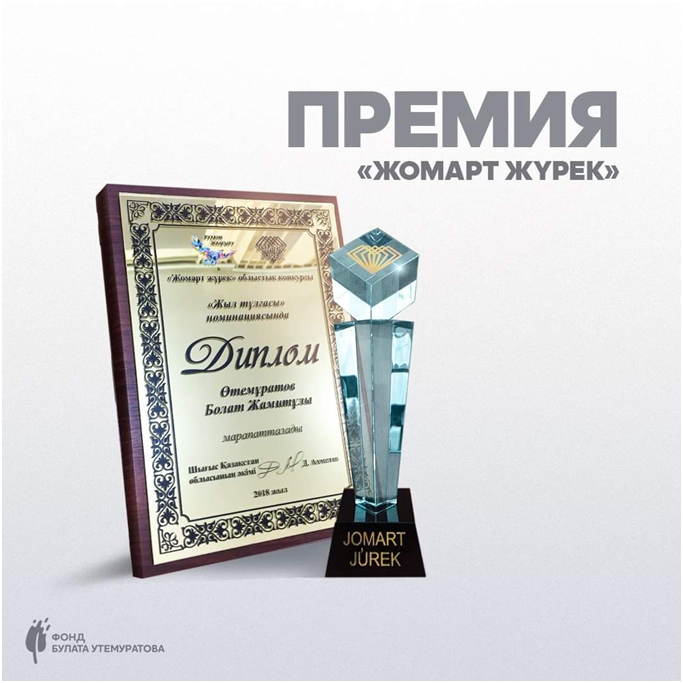 At the end of 2018 Kazakhstani businessman and philanthropist Bulat Utemuratov received several awards at once for his contribution to the charity culture of the country and philanthropic projects which he was implementing through his personal charitable foundation. He was named as the “Benefactor of the Year» according to the rating of the national public award “Altyn Zhurek” (“Gold Heart”) which has been held for 12 years now.

This award rested on the charitable initiatives of the businessman – just as ambitious as his entrepreneurship projects. The largest of them are: “Autism. One world for all” project; annual charity festival Burabike to support equipping of children’s medical institutions; support of the Batyrkhan Shukenov Foundation, the ARDI Association of Parents of Children with ICP, Aruzhan Sain’s DOM Foundation, the VitAlem Coalition of Active and Healthy Longevity, the Red Crescent Society of Kazakhstan; reconstruction of the Central Botanical Garden in Almaty.

In 2018, within the “Rukhani Zhangyru” (“Spiritual Enlightenment”) programme implemented in Kazakhstan, the Ministry of Public Development established the “Zhomart Zhurek” (“Generous Heart”) award to popularise the culture of charity in the country among entrepreneurs, philanthropists, NGOs and volunteers. The organisers are striving to first of all involve benefactors in solving social problems at the regional level.

At the end of 2018, the first “Zhomart Zhurek” award was given out in the West Kazakhstan Oblast, in the “From Heart to Heart” nomination, for opening the Assyl Miras Autism Centre in Uralsk. The Centre’s highly-skilled professionals diagnose and render timely assistance to children with the autistic spectrum disorders (ASD) within the frameworks of the “Autism. One world for all” project by Bulat Utemuratov’s Foundation using the most advanced, well-proven Western techniques and practices. In total, over 12.5 million dollars were allocated for the project where timely assistance was rendered to over 5,000 Kazakhstani children with ASD and their families. Overall, 6 Assyl Miras Autism Centres were opened in the country – in Nur-Sultan, Almaty, Ust-Kamenogorsk, Kzylorda, Aktobe and Uralsk. Three more are coming in 2019 – in Shymkent, Pavlodar and Petropavlovsk.

In 2018 Bulat Utemuratov was awarded “Zhomart Zhurek” in the East Kazakhstan Oblast too. Award in the “Zhyl Tulgasy” (“Person of the Year”) nomination symbolized gratitude of the oblast for the assistance rendered by the philanthropist to people through large charity projects. In particular, in 2018 Bulat Utemuratov’s Foundation, in cooperation with the Red Crescent Society of Kazakhstan, implemented the “Aid Card” project to provide monetary targeted assistance to people affected by floods in the East Kazakhstan Oblast. ForteBank “Aid Cards” were given to inhabitants of 20 localities including Semey, Ayagoz, Zyryanoskiy District – in total 863 families have got 81.7 million tenge transferred to these cards.

In December of the same year Bulat Utemuratov was again nominated for the “Zhomart Zhurek” award, but now at the national level and in the “Zhyl Tulgasy” nomination. Winners were selected through open voting on the www.jomartjurek.com website with 625,000 people taking part in this voting. Bakhytbek Smagul, member of Majilis, handed the heart-shaped statuette over to the director of Bulat Utemuratov’s Foundation during the solemn award ceremony held in the capital. “Zhyl Tulgasy” nomination, in which Bulat Utemuratov won, is intended for benefactors with an active civil position who carry out large-scale charitable activities in various fields.