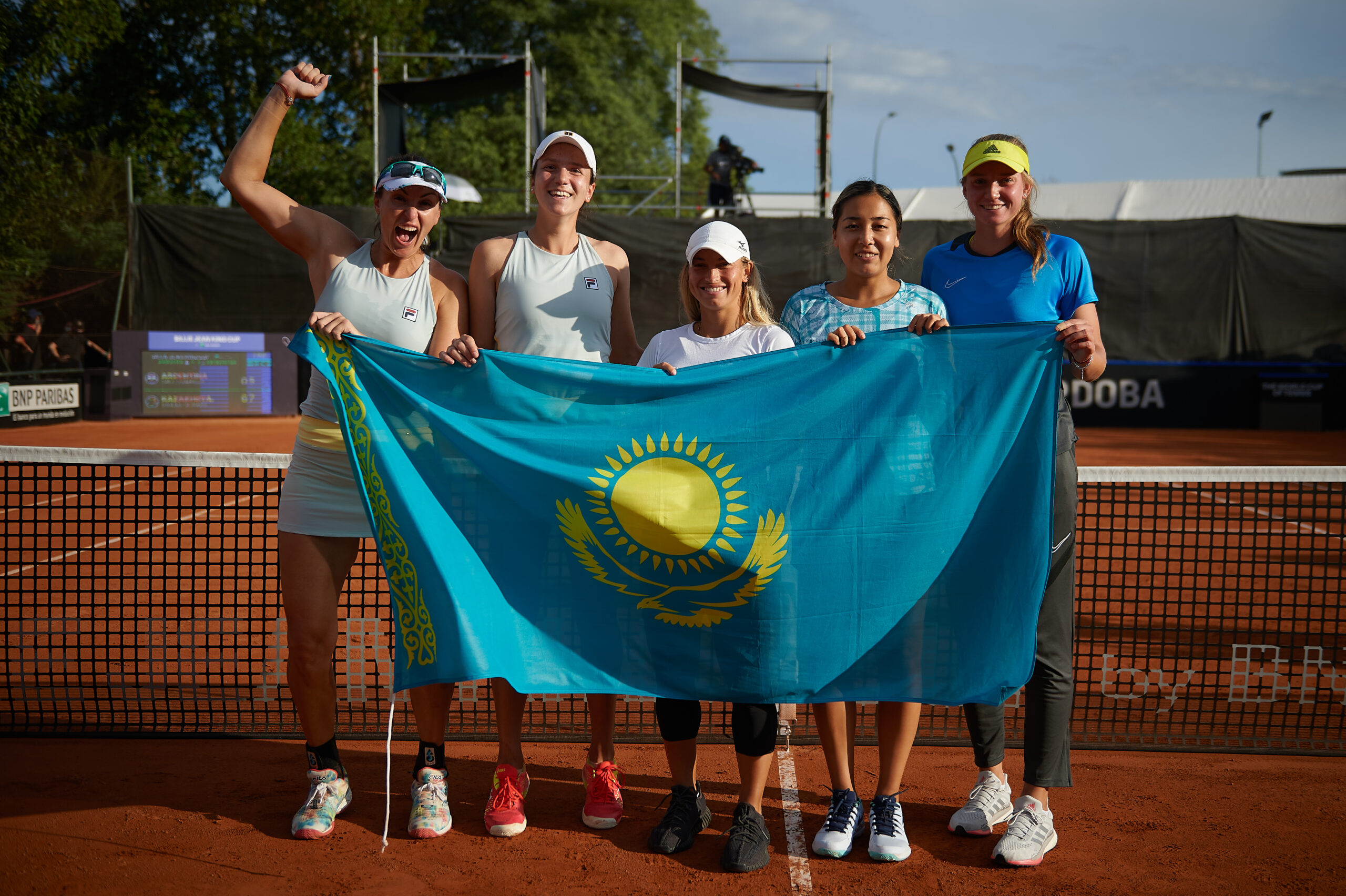 The Kazakhstan national team has once again demonstrated to the whole world the high level of tennis in our country having gained victory over Argentina in the Billie Jean King Cup match. This is the largest international team competition in women’s tennis. Until 2020, the tournament was called the Federation Cup, and after that it was given the name of the legendary American tennis player.

The play-off round match, in which the Kazakhstanis were opposed by the Argentina national team, took place on April 16 and 17 in the city of Cordoba – on the home court for our rivals.

The team included Elena Rybakina, Yulia Putintseva, Zarina Diyas, Anna Danilina and the playing captain Yaroslava Shvedova. The national team of Kazakhstan was called the undisputed favorite before the match, because at once three of our tennis players are in the top 100 of the world rating.

Before the match, the Vice-President of the Kazakhstan Tennis Federation, Yury Polskiy, noted that the even and strong line-up of our team would allow us to effectively build the tactics and strategy of the whole match.

The first rival number was the 45th racket of the world Nadia Podoroshka, she fought for the victory together with Maria Lourdes Carle, who is in the fifth hundred of the rating, But this duel cannot be called easy for Kazakhstan. The first point, taking the decisive game against Nadia Podoroshka to zero, was brought to the national team by Yulia Putintseva (2: 6, 6: 4, 6: 0). After that, it seemed that the victory was closer than ever.

However, feeling sick Elena Rybakina could not play at her full strength with Maria Lourdes Carle (6: 4, 3: 6, 6: 0). The first day ended in a draw with an unpleasant aftertaste from doubts whether Lena would be able to recover by the next game day.

But fortunately, after the rest, a completely different Rybakina came out onto the court. The tennis player no longer had such catastrophic problems with making it into the court and coped with Nadia Podoroshka in two sets (6: 4, 6: 4).

Yulia Putintseva had all chances to win an early victory for Kazakhstan but even here some bad luck interfered: Yulia was unable to complete the game against Maria Lourdes Carle because of the incessant spasm (6: 7 (3: 7), 7: 6 (7: 3) and refused to continue the game. Singles have not revealed a winner.

Our female tennis players showed a team spirit at a difficult moment. When Yaroslava Shvedova realized that Putintseva had serious problems and that she needed to go and warm up before the decisive doubles match, Zarina Diyas took over the duties of the captain.

In the deciding game, the same Podoroshka and Lourdes Carle played for Argentina, and Kazakhstan was represented by the pair of Yaroslava Shvedova / Anna Danilina. In the first set, they severely defeated the Argentines, loosing no single game to them. And then the rivals came to their senses and made the Kazakhstani tennis players and their fans nervous. In the tense ending of the second set, captain of the national team Shvedova simply could not serve in the second square because of this emotional stress, but at the sixth try the girls none the less took this most important game over, and then the set (6: 0, 7: 5). Kazakhstan came out of this meet as the winner with a total score of 3: 2.

“The game turned out to be good, with wild energetics – both for me and Anya, and for the entire national team. We had to go out and fight, we understood the full responsibility not only to the team, but also to the country. We played great as a team these two days, we did our best. Our strength was unity. What happened in Cordoba is a real miracle!” said Yaroslava Shvedova after the victory.

The Kazakhstan national team not only retained its registration in the World Group but also got the right to play in the closing qualification for the 2022 final.

The captain of the women’s team stressed that Kazakhstan has assembled an almost perfect team.

“We need to work on confidence. But with such a team we have the power to make it not only into the final group stage of the Billie Jean King Cup, but also to win the trophy,” believes Yaroslava Shvedova.