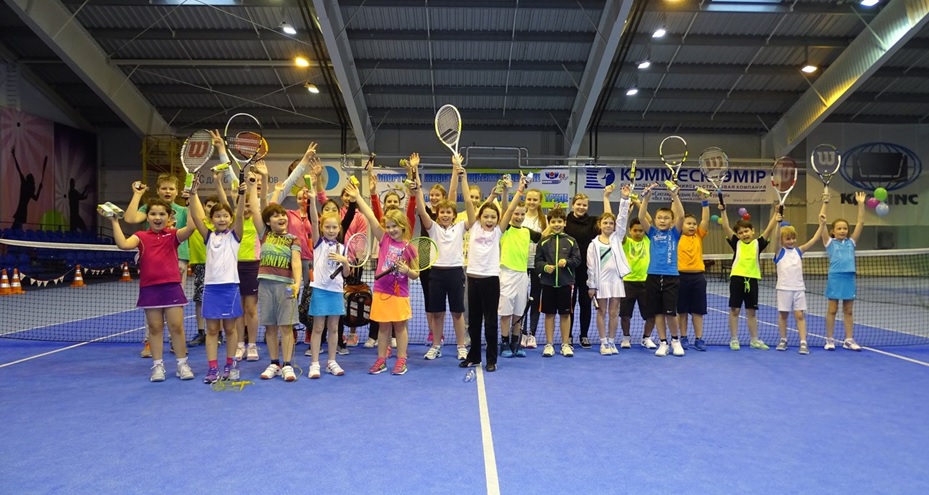 Branches of the Kazakhstan Tennis Federation throughout the country continue admitting the youngest sportsmen to children’s groups (from 3 to 5 years old). They do so in order for children to develop the basic skills of a tennis player at a very early age. Then, by the age of five, it will be much easier for a child to start its journey in the “Tennis under 10” programme.

40 schools and 34 kindergartens throughout the country are involved in teaching children through the “Tennis under 10” international programme in Kazakhstan. More than 2,600,000 children play tennis free of charge. With the financial support of the Kazakhstan Tennis Federation, educational institutions are provided with 5,000 balls, 2,000 rackets and 240 mini-nets annually.

The “Tennis under 10” programme is structured into three levels that are optimal for the development of children. They are named after the color of a ball the children play: red, orange and green. This system allows players to progress according to their age and abilities. The court size, racket length, and ball speed change from one level to the next one. The player is gradually prepared for the transition to the standard court with ordinary yellow balls.

Use of multi-color, lighter or slower balls makes the game more interesting for a child.  Quite often children who start training with yellow balls would finish playing tennis soon because the ball goes too fast, jumps off above their heads; accordingly, rallies become very short, no adequate game can be played really, and children spend their training time running to collect balls. After such training, interest in the game is quickly lost. When children play more with light balls, their motivation to stay in tennis increases, and the risk of injury decreases. At the same time, smaller courts are used, because, playing on the entire court, children simply cannot apply certain tactical decisions.

From cheerful games to serious tournaments

Consistent work of the Tennis Federation helps to develop infrastructure for young athletes in all regions of Kazakhstan. Tennis centres attract a great number of children and teenagers, there are already 26 centres throughout the country. The centres meet international standards, are suitable for holding a big number of tournaments. Thanks to this, tennis is becoming more accessible and attractive for children.

David Miley, KTF Executive Director for Tennis Development, notes that to improve the level of Kazakhstani tennis, they constantly work to improve the skills of the coaching staff, and national tournaments are regularly held for children and teenagers.

No pressure is put on little children at the preparatory stage. They just play with each other, and there could be about ten people on the court at the same time. Thus, tennis becomes more understandable and available for children. If training begins to turn into a professional track, more stringent requirements will be imposed on the child.

“Every child who starts to be trained in tennis is a talent in his way,” says David Miley. “At first, we observe his movement on the court, his work with the racket and conduct various tests on running, jumping and coordination. At the age of 9-10, children are already quite adapted to the game, understand its basics and are ready for competitions. We hold tournaments for them, but there is still no pressure: at this stage, the children are not assigned ratings so that young athletes are not demotivated due to possible failures.”

Coaches watch how the child behaves at such tournaments, how he gets up for the game, how he applies techniques and tactics that he has in his arsenal. And only in adolescence, mentors pay attention to the progress and results of the player. It is only from 14 years old that tennis players are assigned ratings based on the results of participation in competitions.

What else a child can learn from tennis

Tennis for a child is not only an excellent way to develop his physical skills that put on the job all muscle groups, but also a priceless psychological experience. David Miley, Executive Director of the Tennis Federation, calls this sport the most honest and fairest.

“Tennis teaches players to be honest towards a rival. The outcome of the game is decided by the mastery and intelligence of the player, and not by various return services and unnoticed violations of the rules. Being on the court face-to-face with the opponent, a person learns to react to the current situation and independently solve problems that arise during the game. Tennis teaches you to be ready for anything: a matchpoint does not guarantee the victory, and a player who is lagging behind in a score should not give up ahead of time. Tennis teaches you never to give up, whatever the situation is on the court. The tennis court can be compared to a microcosm with its own micro situations, where almost everything that happens in life can happen,” says David Miley.

Photo by the Kazakhstan Tennis Federation