Team Kazakhstan: how they bring up tennis champions in Kazakhstan

Team Kazakhstan is the first tennis academy for promising children in Kazakhstan. It is not just professional sports training, but also advanced learning of English and school subjects. The best students can enter prestigious foreign universities. This is the story of how the once elite sport became widespread and how ordinary Kazakhstani children are trained to be court champions.

This is a unique school where promising teenagers are selected to be trained for the professional sports. For the success in court tennis depends not only on physical condition but also on the time spent on the court. The more time spent, the higher are chances to bring up champions. Therefore, in 2008 the academy started selecting 12-17-year old teenagers, and later – younger children too.

Team Kazakhstan is a symbiosis of a sports school and a gymnasium for talented children. It is not only the court and the gym, it is a big campus where children live in boarding school settings. But the academy has nothing to do with that boarding school as many imagine it.

“We try to envisage everything: psychology, catering, physical training, progress in studies”, – tells Dias Doskarayev, Vice President of the Tennis Federation. “We want children to have achievements not only in tennis, they also must be progressing in their studies. If a child is successful at school, he/she is also successful in sports. We are frosty about children dropping out of studies and missing their classes. There is a stereotype: if someone is an athlete, that means the person was not good enough for anything else, however, our students are successful people – not only in the sports, but in the life too.”

Days in the academy are mapped out to the hour:

The schedule helps keeping the discipline, which, in turn, instils in children self-sufficiency and responsibility – important qualities of a successful person.

Why the academy students study English in depth

The students used to study in the gymnasium classes of gymnasium school No 17 named after Akan Kurmanov with a linguistic bias. This year teachers are invited to the academy to teach English and Russian, and literature.

Why is the emphasis put on linguistics? Because a child, engaged in tennis, enters the environment where everyone speaks English: at training camps abroad, at international competitions.

Tennis is not a team sport. A tennis player is on his own on the court. He must be able to reply to the judge or to challenge a decision in English. By the way, as tennis is an individual sport, a child becomes independent earlier. Even when the game is being played on the court, the rules prohibit any tips to be given by the trainer, thus the player learns to take decisions independently.

Training at school is just the first stage. The best tennis players are invited by prestigious foreign universities to play for the university and their education expenses are covered. The cost of education at an American university, for example, is USD 20,000 a year.

Students are trained by both local trainers who took courses abroad, and by invited professionals. 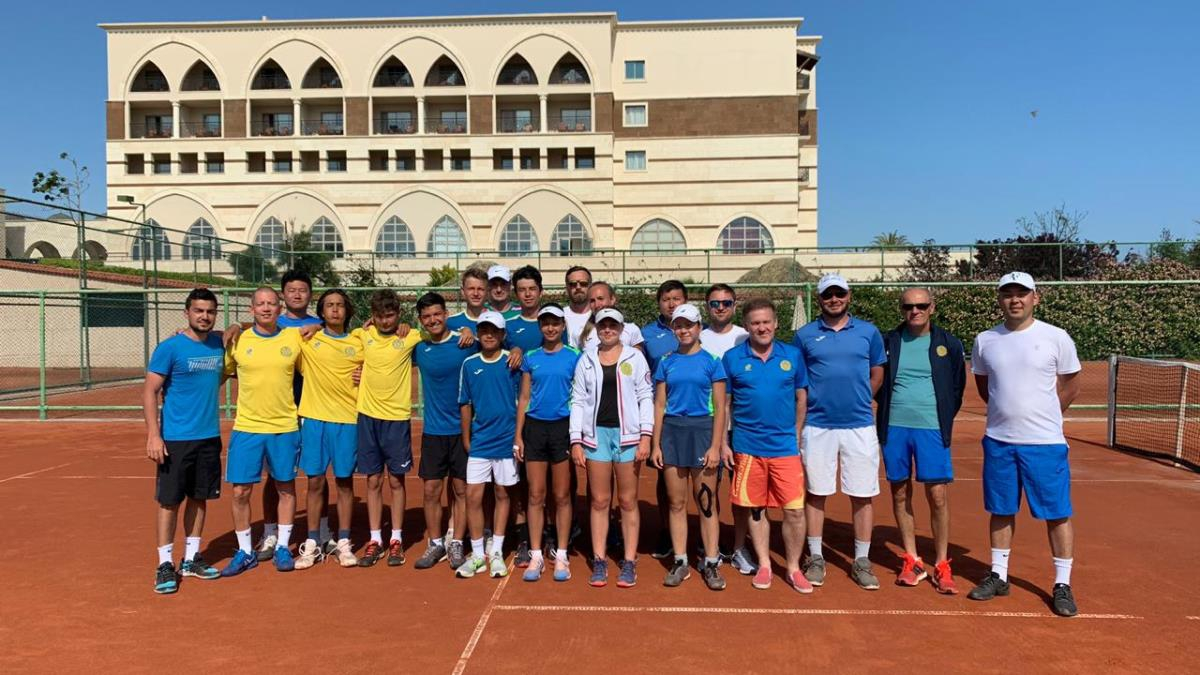 Team Kazakhstan invited to cooperate famous tennis academies of international renown. Thanks to this, the students train and have meets in Spain, the US, China and Turkey.

Currently the academy has been re-organised into Team Kazakhstan combined teams and has 32 sportsmen of the first-string and reserve rosters.

What results were achieved by Team Kazakhstan for 11 years 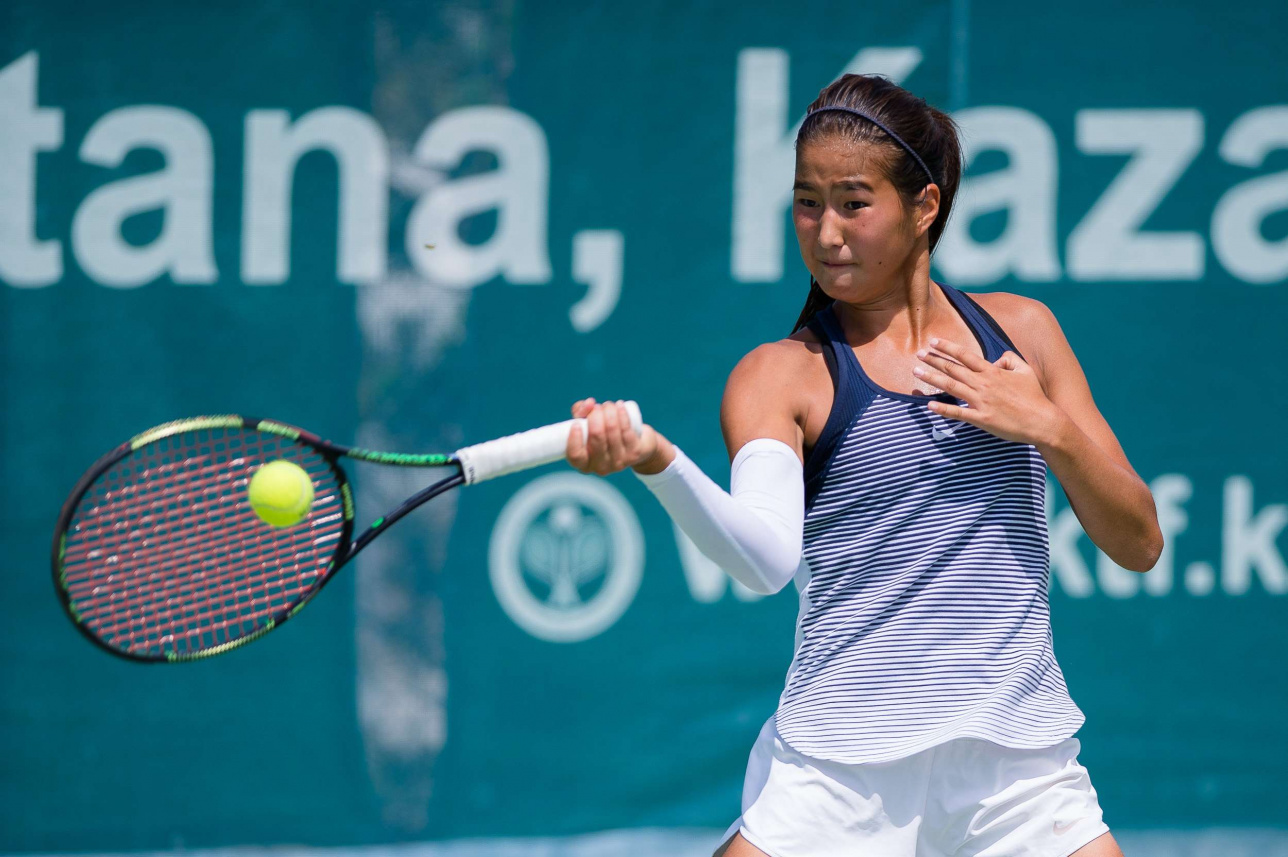 “The male team has entered the top-8 in the Davis Cup – that is very prestigious, high-status and pleasing”, – emphasises Dias Doskarayev. “But we are twice happier when our children perform. A big number of children under 12 years got award-winning places in European tournaments. These are Aiya Nurbay, Karina Dzhumazhanova, Zhanel Ospanova, Maxim Batyutenko, Yerasyl Yerdilda, Sandugash Kenzhibayeva, who excel in tournaments in Germany, France, Indonesia.  They won the third place in the Asian Championship in the team rating. We have never had such success before.”

For the first time in the history of Kazakhstani tennis, Team Kazakhstan students Sandugash Kenzhibayeva and Yerasyl Yerdilda will go to the most prestigious tournament among children in France. Les Petits As – an unofficial world championship for children under 14 years – in 2020 will take place in Tarbes. They were not simply invited – they passed through the qualification selection during competitions in Indonesia.

In 2007, before Bulat Utemuratov took the charge of the Tennis Federation, this sport was perceived as an elite one. A little bit more than 500 people were engaged in it throughout the country. These were amateurs and youngsters who could afford renting an expensive court and lessons with a trainer. For the recent 12 years, tennis has turned from the posh sport into the wide-spread one.

This was made possible thanks to the infrastructure set up throughout entire Kazakhstan. In 2007 the Tennis Federation developed a five-year programme which was agreed by the President of the country. Then this strategy was renewed every next five years.

“One of the components of tennis development is the infrastructure”, – says Dias Doskarayev. “In the first instance, it was necessary to make it accessible for masses so that children would have opportunities to engage in this sport all over Kazakhstan, to train both at the amateur and professional levels. This is also needed for making the nation healthier. Therefore, all the groundwork was done for children so that they could practice tennis systematically, so that they would look at tennis as at a sport of the highest achievements”.

The Tennis Federation built new courts all over Kazakhstan. If in 2007 there were 60 courts, now there are over 270.

In Almaty, in the Bostandyk District, where courts were lacking, the Tennis Federation built the “Ace” centre. This is 10 outdoor and indoor courts, a gym, a cafeteria, teaching resource rooms for tennis players.

“There are about 320,000 people living in the Bostandyk District. Therefore, it was important for us to cover this area”, – explains the Vice President of the Tennis Federation. “Currently the centre is attended by 507 children. Under the same project, the Akimat of Almaty has already selected a site in the Alatau District near the Almaty Arena for a similar tennis centre.”

In Nur-Sultan, in Momyshuly Street, a tennis centre of 14 courts is being built under a Canadian project. According to the authors’ design, it will have 8 courts inside, 6 courts outside and two gyms.

In Shymkent, the National Tennis centre increased the number of indoor courts up to 18. A hotel was built next to it for teams coming from all over Kazakhstan. A classroom was also provided there so that children would not lag behind their studies during meets and training.

In Aktobe and Petropavlovsk, a tennis centre was built under the public-private partnership programme.

“Aktobe is the city where one tennis centre will be followed by the second one”, – comments Dias Doskarayev. “This proves that there is high interest and demand in this sport. When we open a tennis centre, we try to have it built in compliance with the latest technologies, requirements and world standards, so that it could be used not only for training children, but for holding international tournaments too.”

In Karaganda and Aktau, construction of the second in count tennis centres is also starting.

“We see that tennis becomes so popular that we have no time to build”, – confesses our interlocutor. “Every year we launch two-three tennis centres, but the number of courts grows slower than the number of children. This is an uneasy burden of the Tennis Federation President, Bulat Utemuratov, who has to negotiate with regions, akimats (local administrations), get many approvals, search for funds, and incur substantial expenses. For example, the “Ace” Tennis Centre in Almaty cost USD 5.7 million. This is a lot of money, but children want to play tennis, and we satisfy this need.”

Large-scale construction of new courts resulted in the reduction in tennis court rentals throughout Kazakhstan. If at the dawn of the “noughties” an hour of the game cost 50 dollars, currently the price has fallen down 10 times and is on average two-three thousand tenge. Now tennis can be played not only by businessmen and bankers but by all comers. In total, over seven thousand people are engaged in tennis in Kazakhstan.