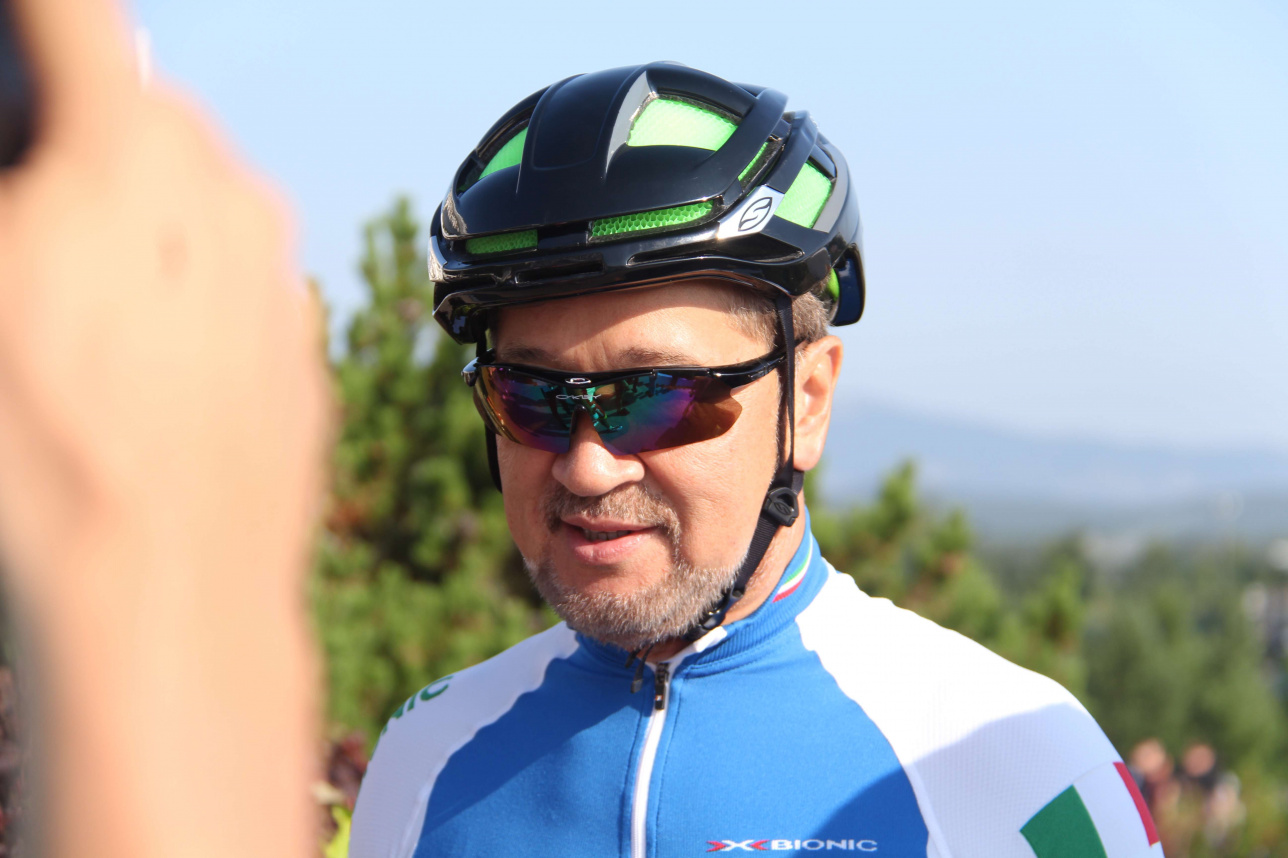 For seven years Burabike Fest has collected 1 billion tenge. The charity project allowed for 25 hospitals in remote areas of the country getting the long-waited medical equipment.  Only in 2019, 4,000 people took part in the Burabike charity festival.

These figures have behind them a big job and big hearts of the organisers and participants of the annual charity festival which has been held since 2013 in the Schuchinsk-Borovoe resourt area jointly with the Rixos Borovoe Hotel. The purpose of this project is important and useful – collection of money for purchase of the vitally important equipment for oblast, district and rural medical institutions.

Last year, thanks to participants and sponsors of Burabike Fest 2019, the amount of charity proceeds reached the record 300.2 million tenge. The idea to arrange such a festival, gathering together all friends and caring Kazakhstanis was initiated by businessman and philanthropist Bulat Utemuratov. He himself takes parts in the bike ride and auction ever year, creating the desire to help and share in the entrepreneurship society.

“In 2019 we put up a tent village, organised a concert, programmes for children. This included sports and family recreation with the musical accompaniment. People enjoy the festival very much, and most importantly – the raised money are used for charity purposes”, told Bulat Utemuratov to journalists during the festival held in Borovoe.

Charity has to be organised thoroughly, otherwise its super idea – to help and to support those who needs this – will be lost. In the case of Burabike Fest, everything runs like clockwork: every year, at the agreed time, business community representatives, famed sportsmen, journalists and artists gather in Borovoe to have the bike ride and to take part in the auction afterwards.

Lots are put up for charity trading. In 2019, for example, one could see flutes from the collection of Batyrkhan Shukenov, an autographed racket of Rafael Nadal, a bicycle of the Astana team racer Davide Ballerini and a jacket of Dimash Kudaibergen. All these people are friends of Bulat Utemuratov. With the proceeds from the auction, vital medical equipment is bought and distributed to needy hospitals throughout the country. The idea is fully supported by the head of the National Scientific Cardiac Surgery Centre, the renowned cardiac surgeon Yuri Pya.

In 2019 he took part in the music and sports festival. This is the second bike ride done by Yuri Vladimirovich at Burabike Fest. The festival, in his opinion, changes the society to the better.

“This proves that people are ready not only to have a healthy lifestyle but to do the good. We arranged various events in our centre too. After that we have got an invitation from Bulat Zhamitovich to take part in the events held by his Foundation. It’s great that such things are developed here too”, said the renowned cardio surgeon.

Eight medical institutions throughout the country received equipment which helps to increase the quality of services provided to patients, thanks to the results of the VII Sports and Music Festival Burabike Fest 2019. These include the district hospital in the Shelek village, Almaty Oblast. On 28 January 2020 Bulat Utemuratov’s Foundation gave an artificial lung ventilator apparatus to this small district hospital.

“An artificial lung ventilation apparatus costing 14 million tenge was given to the newly renovated intensive care department of the district hospital in the Shelek village designed for 180 beds and servicing 50,000 people in the Yenbekshikazakh district of the Almaty Oblast. We hope it will serve well, and we wish the doctors not to have to use it often and all patients to recover soon”, said Marat Aitmagambetov, Director of Bulat Utemuratov’s Foundation.

In previous years equipment from Bulat Utemuratov’s Foundation was received in the Almaty Oblast by the Taldykorgan perinatal centre, district hospitals in Panfilovo (Talgar district) and Alakol (Alakol district).

On 10 February Bulat Utemuratov’s Foundation transferred new medical equipment for the total amount of 58 million tenge to the Zhangaly district hospital in the West Kazakhstan Oblast. The equipment includes a modern fully equipped Mercedes-Benz Sprinter mobile intensive care unit priced at 44 million tenge, and an artificial lung ventilation (ALV) apparatus totaling 14 million tenge. By the way, the Zhangaly district consists of eight rural areas where about 25,000 people live. And all these people are serviced by one central district hospital designed for just 45 beds.

“The hospital urgently needed a new mobile intensive care unit in order to quickly transport patients from five medical outpatient clinics and three feldsher’s stations as well as to deliver critically ill people to hospitals in the oblast centre of Uralsk. The hospital’s need for an ALV apparatus was no less acute. Instead, the doctors were forced to use an outdated anesthesia and breathing apparatus, which did not allow to regulate the oxygen supply, because of which a patient might receive mechanical injuries of the respiratory tract”, said the staff of Bulat Utemuratov’s Foundation.

Thanks to the charity proceeds raised at Bulat Utemuratov’s initiative, assistance was rendered to the Yesil district hospital in the Akmola Oblast. It received medical equipment for 73 million tenge.

A territory of 8,000 square kilometres, one town and 17 rural districts, 25 thousand people and no single mobile intensive care unit, 20-year old medical equipment which is obsolete both physically and morally. These were realities of work of the staff in the Yesil district hospital, Akmola Oblast, up to the beginning of 2020.

“Imagine a situation: you have a woman in childbirth with a severe case of the third category, you must take such women to the maternity hospital in Kokshetau, 350 km far, and even further – to Nur Sultan, 415 km far. It is urgent, because it is the question of the life of the fetus and mommy! And you have no special vehicles, what should you transport them in? We got out by borrowing a Gazelle vehicle from an ambulance station or mobile intensive care units from colleagues in neighboring districts. And each time the whole team was under stress. Now we have our new, modern mobile intensive care unit, and there will be no more rush job situations connected with the search for special vehicles”, says Dastan Asanuly, head physician of the Yesil hospital.

The hospital received a set of medical equipment at the beginning of the year, including the flagship mobile intensive care unit of the Mercedes-Benz brand with a full set to save and protect a person’s life, a modern anesthesia and breathing apparatus for the surgery department and an incubator for intensive care of newborns in the intensive care unit.

“Our old anesthesia and breathing apparatus, which is over 20 years old, as far back as of the Soviet design, was at death’s door, it is impossible to find spare parts for it anymore. Now we have the newest apparatus of European make, complete with a system for monitoring the depth of anesthesia and sedation with all accessories. We have a new Japanese incubator for the intensive care unit with adjustable supply of oxygen and humidity, thanks to it we will nurse back to health many premature and serious case newborns!” shared his joy the head doctor.

Hundreds of lives of adults and babies are behind each of such purchase, donation, gift, charity that will help to save them. The newest equipment fitted in compliance with all standards was received by: Zhangaly, Yesil, Kyzylzhar central district hospitals, Akmola Oblast Multi-Profile Hospital, Taldykorgan Town Hospital, Kyzylorda Perinatal Centre “Ana men bala”, district hospital in the Shelek village and the Research and Scientific Institute of Orthopedics and Traumatology in the city of Nur-Sultan.

In 2020 Burabike Fest will be held on 29 and 30 August. Bulat Utemuratov’s Foundation receives applications from potential beneficiaries for purchase of medical equipment. Registration of participants of the event will be open from 15 March on the burabike.kz website.

Bulat Utemuratov’s Foundation was set up in the beginning of 2014. The Foundation’s mission is to help Kazakhstan to become a better place for the life of people today and in the future through the support of development of healthcare, education and culture. The idea to create the foundation belongs to its founder Bulat Utemuratov, who, a while back, has allocated 12.5 million dollars for the “Autism. One world for all” fund programme.