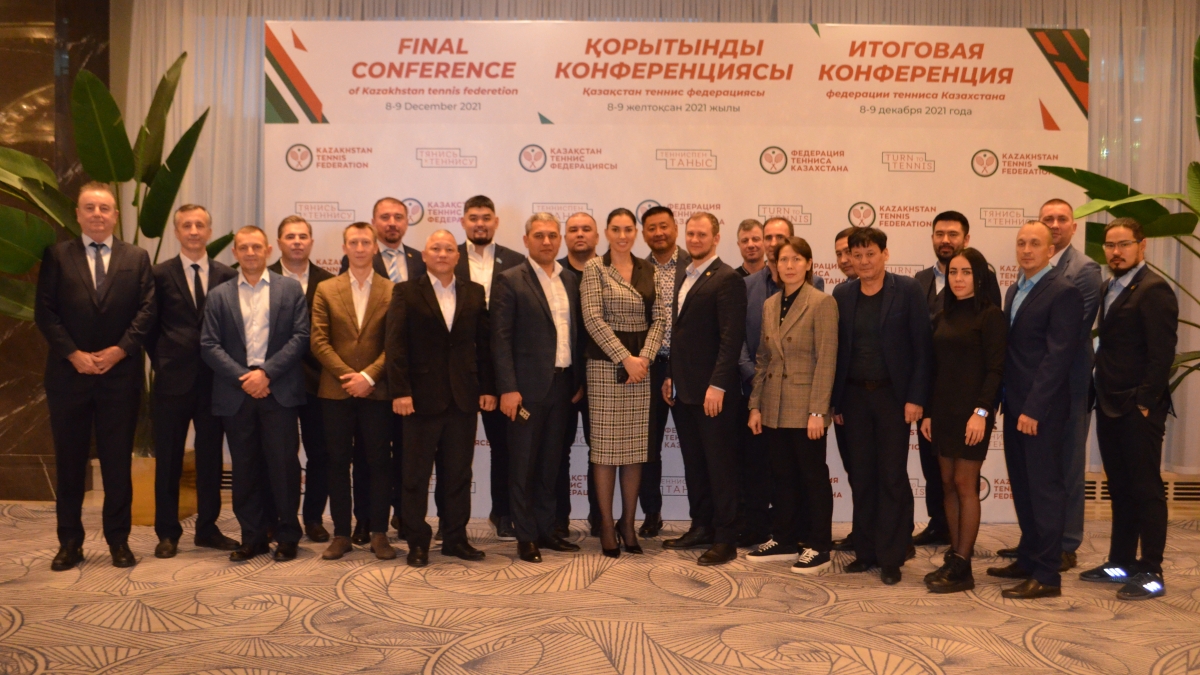 The Kazakhstan Tennis Federation held its closing reporting conference on 8-9 December in Nur-Sultan. Heads of regional branches, tennis centres and employees of the KTF Head Office gathered to present reports on the work done in 2021 and to outline plans for 2022, reports the KTF Press Service.

In total, the year gone by, despite of the continuing coronavirus pandemic, shaped well for the Kazakhstan Tennis Federation. The KTF reached the end of the year with the following key outcomes:

Improvement of the tennis centre in Shymkent was fully completed. In April, a tennis centre was opened in Lisakovsk town, Kostanay Oblast. It was built on the territory of the central stadium, where all the major sports grounds of the town are concentrated. The total cost of the project exceeded 300 million tenge. In addition, in the spring, a modern tennis centre “Zhan Dosym” was opened in the sports complex of the Kazakh National University named after Al-Farabi. The indoor centre of the newest generation includes six courts and a grandstand for 165 spectators. The high-quality surface of the courts meets the international requirements. The project was implemented on the initiative of the “Zhan Dosym” tennis club with the support of KazNU named after Al-Farabi and the Kazakhstan Tennis Federation. Along with the construction of new courts, the existing bases are being improved to meet international standards for hosting major tournaments. For example, the CSKA tennis courts in Almaty, built and reconstructed by the Kazakhstan Tennis Federation 9 years ago, have undergone transformations in 2021.

Summarizing the results of the outgoing year, an excellent job was done by the Kazakhstan Tennis Tour (KTT) Department of the Kazakhstan Tennis Federation. 47 international and 28 KTT tournaments were held (including two championships of the Republic of Kazakhstan and a youth championship). The ATP 250 Astana Open tournament returned to the capital exactly one year later. And this year not just on its own, but in tandem with the women’s tournament – WTA 250. At the end of the outgoing year, the final of the Asian Team Championship U12 was held for the fourth time in Nur-Sultan. The Kazakhstani boys’ team won silver, and the girls’ team got the gold medal.

International and Republican tournaments of various categories were successfully held in Ust-Kamenogorsk, Almaty, Shymkent and Karaganda. Karaganda hosted two major ITF W25 women’s tournaments and the junior’s ITF tournament of the fifth category. Some regions hosted tournaments of such a high level for the first time, which speaks for the recognition of the high level of the Federation’s oblast branches.

Baby Tennis and Tennis 10&U is one of the important and priority objectives for the KTF. Baby tennis coordinators are appointed in all major centres. All major tennis centres have plans developed for the work with children by March 2022. Booklets and banners were issued for tennis players / parents of the Tennis 10&U programme with a structure of development of KTF players and advice for parents, now available in all tennis centres. 21 coordinators were hired to hold festivals and events of orange and green colour in all tennis centres of the country. To train coaches under the Tennis 10&U programme, world specialists Mike Barrell and Alexey Ivantsov were invited.

Training of coaches and judging

The development of Kazakhstani coaches and training of the required number of coaches to meet the urgent need for coaching staff in all regions of Kazakhstan is of particular importance for the KTF. In this direction, seminars and refresher courses for tennis coaches and instructors for Tennis 10&U, as well as an ITF Level 1 seminar, were held during the year. A training programme for leading players who have retired from sports (Fast Track) is being conducted; it is designed to prepare local young professionals to carry out work in the regions.

Judging is developing in the Kazakhstan tennis tour with great strides. There are 10 international judges in the country. Yulia Ignatchenko and Meruyert Kaukeyeva have Bronze badges. In 2020, Yulia and Meruyert joined the WTA’s most talented female judges team. This year, the girls successfully worked at three Grand Slam tournaments (Australian Open, Roland Garros and Wimbledon), as well as at the Olympic Games in Tokyo.

Achievements of national teams and juniors

2021 can surely be named as one of the most important years in the history of the Kazakhstani tennis development.

Kazakhstan’s No.1 Alexander Bublik turned into one of the swiftly developing players. In 2021, Alexander played in two ATP 250 tournament finals in Antalya and Singapore. However, Bublik achieved his most important success not in singles but in doubles together with another Kazakhstani tennis player – Andrey Golubev. The duet reached the final of Roland Garros but lost to the court hosts in the deciding battle of the French slam.

The second racket of our country, Yulia Putintseva, won her second title at the clay ground tournament in Budapest, and at home – WTA 250 Astana Open – she pleased the local fans with a beautiful game and reached the final.

The victorious march of the women’s national team began far from home – the girls went to Argentina in April 2021, where they played against the hostesses of the courts in the playoff round of the Billy Jean King Cup. Four dramatic in their tension singles games have not revealed a winner. The fate of the meeting was decided by the doubles match, in which the duet of Yaroslava Shvedova and Anna Danilina turned out to be the best. Thus, Kazakhstan took a historic victory, winning for the first time on the road in the playoff rounds, and won the right to play in the 2022 qualification final, where our girls will play at their home ground against Germany.

It is always a great honor for athletes to play at tournaments as members of the National Team. Of course, the Olympics stand apart. Our tennis players managed to win a record 8 licences for the games in Tokyo – twice as much as the previous figure. The performance of the rising star of world tennis – Elena Rybakina – was most successful. The representative of Kazakhstan took the fourth final standings under the hot Japanese sun.

The Davis Cup team left the group from the first place at the final stage in Madrid but had a chance to win over the strong Serbian national team led by Novak Djokovic in the quarterfinals. In preparations, reserve players were included in the national team: Timofey Skatov and Beibit Zhukayev, who should further strengthen our team in the near future.

Kazakhstani juniors won a record 37 ITF Juniors tournaments in singles and doubles during the year and became finalists in 44 more tournaments. In TE U14 tournaments, our tennis players have won 19 tournaments and reached the finals 15 times. The results of 14-year-old Inkar Dyusebay, who won three ITF singles tournaments among U18 players, are impressive. Our players Bakhtiyar Yerasyl and Polina Sleptsova are the first in the ATF (Asian Tennis Federation) rating, where they won 5 tournaments and played 8 more finals. Zara Darken became the winner in the European Tennis “Player of the Year Outside Europe” category, and Amir Omarkhanov not only won three TE tournaments, but also reached the final of the ITF Juniors J5 tournament, which is a very good marker for a 14-year old. Zangar Nurlanuly is also actively progressing, and having won 2 TE tournaments and played 2 more finals, he now holds the 77th position in the TE. It should be specifically mentioned that the great credit for the results achieved goes to the coaches.

Quite recently, at a meeting of the International Tennis Federation, the number of Kazakhstan’s votes was increased to seven. This is the third of the six levels in the order of importance. Countries are divided altogether into 12 votes. Now in terms of influence our country will be in the ITF on a par with such states as: Croatia, Serbia, New Zealand, South Korea and Thailand. Thus, Kazakhstan has officially entered the world’s top 20 countries in terms of the overall level of tennis development. Also, KTF Vice-President Yury Polskiy was elected to the Board of Directors of the Asian Tennis Federation (ATF). All these facts indicate the high competence of Kazakhstani tennis in the international arena.

President of the Tennis Federation Bulat Utemuratov did a recap of the closing reporting conference:

“Thanks to our joint efforts this year turned out to be very successful for Kazakhstani tennis, even despite all difficulties related to the continuing pandemic and multiple restrictions complicating holding of tournaments and travelling for players. The work on training of coaches will be continued with an emphasis on coaches getting the fundamental sports education and managerial skills to ensure strong basics for further professional performance as leading mentors. This year we have worked out an increase in funding for promising players in all regions in order to accelerate the process of their sports growth. This work, in my opinion, has just begun and should be actively continued next year,” said Bulat Utemuratov.

The President of the Kazakhstan Tennis Federation noted in his speech that in 2022 they would pay a special attention to the regions:

“Each region should provide a decent support next year to their lead players for participation at least in 8 key national and 5-6 international tournaments. There should be at least two tournaments in each age category in a region. A selective recruitment of children at the younger age of 5-7 years should be performed everywhere to create a high-quality “sports pyramid”. All existing problems with the infrastructure of operating tennis centres should be resolved in all regions within a year: repair of tennis court coverage, lighting and others. The Federation will provide the necessary support. It is a pleasure to note that new tennis centres will be opened in Almaty and Turkestan in 2022. It is planned to build new tennis centres in the cities of Taraz, Uralsk, Shymkent, Almaty and Nur-Sultan. A substantial foundation has been laid for the development of tennis, which requires further active work of each region in order to achieve the goals of educating future champions of Grand Slam tournaments and scaling up the mass of people trained,” concluded Bulat Utemuratov.