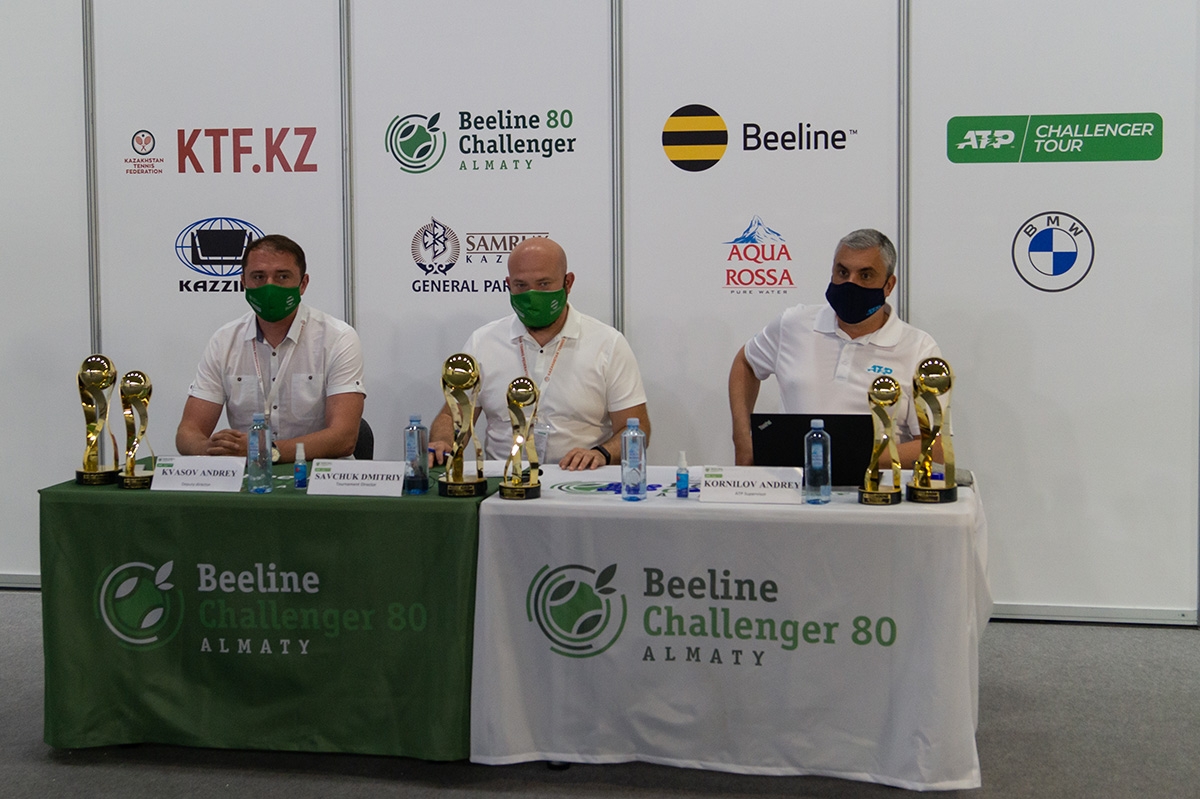 The President’s Cup that included two men’s Challengers and one women’s tournament of the ITF W60 series finished in Nur-Sultan on 25 July.

This year, when other countries refuse from holding tennis tournaments due to the pandemic, Kazakhstan is hosting the whole series of international level competitions ensuring safety of players. From February to May only, the Kazakhstan Tennis Federation held several professional tournaments of the ATP Challenger and ITF World Tennis Tour series.

Summer is no less intense. The games started with the two-week Beeline Challenger 80 – two tournaments of the ATP series (the highest level world tennis tour organized by the Association of Tennis Professionals). Here, the minimum prize fund starts at $ 52,000. The winner gets 80 points. For participants, this is an opportunity to play with strong opponents, go up in the rankings and earn generous prize money.

“It is necessary to mention the games played by our athletes – Dmitry Popko, Denis Yevseyev, Grigoriy Lomakin, Dostanbek Tashbulatov, Timofey Skatov. Popko reached the semifinals of Beeline Open Challenger 80 Almaty, and Skatov reached the final. Unfortunately, he lost in the final, but this is still a very good result, because he moved up in the overall rating. After all, why are these tournaments held? So that our athletes gain experience, earn a rating that will allow them to participate in more prestigious tournaments,” explains director of the Kazakhstan Tennis Tour Dmitry Savchuk.

In addition, tennis players can get a Wild Card (“free card”) at these tournaments, which gives a player with a not high enough rating an opportunity to take part in the tournament without going through the qualification.

“When we hold such tournaments at home, we can give our athletes wild cards. Thus, players get through to the main tournament and get a chance to beat opponents and win first points. In addition, we have a programme of exchange of wild cards with other countries, i.e. our athletes can take part in tournaments held in other countries as exchange. Currently, there are not many tournaments across the world due the pandemic, therefore we are trying to support our athletes, give them more experience, opportunities to develop their ratings and to take part in other tournaments through exchange,” says Dmitry Savchuk.

The level of such tournaments implies participation of players from the top-300 world rating. This year’s Beeline Challenger 80 was attended by sportsmen from various corners of the globe (France, Germany, Russia, America and Asian countries).

International games within the President’s Cup started in Nur-Sultan on 10 July. This year the tournaments were given names: the women’s tournament – Tomiris W60, two men’s tournaments – Kerey80 and Zhanibek80.

“The President’s Cup is an event with a 30-year history, there is no single other tournament that has been held in the years of Kazakhstan’s independence longer than that. The names of the President’s Cup tournaments are a direct reference to the past as a link between generations, to the history when the Kazakh Khanate was established by Kerey and Zhanibek. That is why their names were chosen as the names of men’s tournaments, and the women’s one is called Tomiris in honor of the Saka queen,” – explains Pavel Tsybulin, head of the PR, marketing and information section of the Kazakhstan Tennis Federation, to explain the names of the tournaments.

But more than 10 years ago, our players could not have dreamed of holding international tournaments in Kazakhstan. At that time, the country had no courts that met world standards. When the lead of the Kazakhstan Tennis Federation has been taken by philanthropist Bulat Utemuratov, the situation changed dramatically. Tennis bases that meet high requirements started to open in the regions.

“Until 2007-2008, there were neither so many tennis bases in Kazakhstan, nor players, and the development of tennis itself was, let’s say, not in the priority. Now, if we compare the CIS countries, then Kazakhstan is in the first place, because cool tennis bases with outdoor and indoor courts, with all the infrastructure have been built in each region. The Kazakhstan Tennis Federation is doing everything so that our young generation grows up, develops and turns into professionals,” emphasises Dmitry Savchuk.

The athletes’ achievements speak for themselves. It’s useful enough to recall the last performance of Kazakhstanis at one of the prestigious Grand Slam tournaments in France – Roland Garros, which took place in Paris in June. Our players Andrey Golubev and Alexander Bublik in a pair made a historical sensation: for the first time in the history of Kazakhstani tennis they reached the final of the French Open in men’s doubles.

Also, good results are shown most recently by the pair of Andrey Golubev and Alexandr Nedovyesov. Our female tennis players – Elena Rybakina, Zarina Diyas, Yuliya Putintseva, Yaroslava Shvedova conquer new heights. The junior players are not far behind too.

By the way, as soon as in August Kazakhstan will host two tournaments: the Tennis Europe Junior Tour for 12-year-olds in Nur-Sultan and the Asian ATF Junior tournament for 14-year-olds in Shymkent. Tennis fans will also see another women’s ITF-25 tournament in the last month of summer. The plans are to hold the largest and most titled international tournament in Kazakhstan in September, but we will tell about it later.