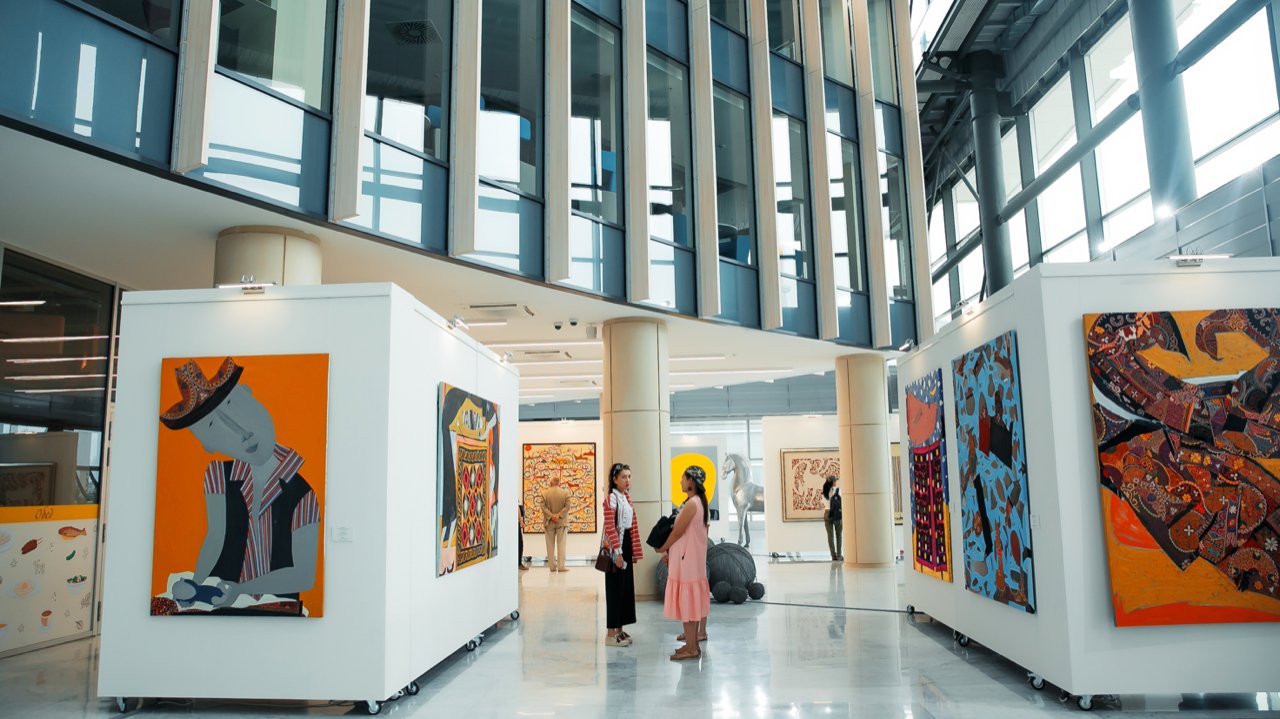 The ForteBank Kulanshi ArtSpace project was launched in 2016. Then, at the initiative of the ForteBank major shareholder, businessman and philanthropist Bulat Utemuratov, they managed to return to the homeland 24 paintings by well-known Kazakhstani artists. Masterpieces by Kasteyev, Mullashev, Stepanov, Aitbayev, Tynsykbayev and several other renown artists, bought back from abroad, formed the foundation of the new art space’s collection and became accessible for viewing to all Kazakhstanis and visitors of the capital absolutely free of charge.

The shareholder entrusted the curatorship of the ForteBank’s modern gallery with the Kulanshi Modern Fine Arts Centre headed by well-known Kazakhstani artist Leila Makhat.  The Bank’s partnership with the brightest art project of the capital was commented by Bulat Utemuratov in this way: “When love and skills come together, you can expect a masterpiece.”

And Leila Makhat speaks about her creative work in Nur-Sultan in the following words: “Having returned to Astana in 2017, I understood that there was no such a site here which would satisfy me as an artist and an organiser of exhibitions. The pieces of art brought by me from other countries and produced by myself did not fit into the frameworks of the museums and galleries which then existed. When I studied at the Berlin Municipality Museum Academy, we had practical lessons in various museums and galleries. In Astana I started doing what I have learnt by then and how I saw it myself. You cannot just come and put paintings up, every project must have its concept.” The Kulanshi team still follows these principles when they implement projects of the Modern Fine Arts Centre and ForteBank Kulanshi ArtSpace.

Located in the headquarters of ForteBank in the city of Nur-Sultan at 8/1 Dostyk, the ForteBank Kulanshi ArtSpace gallery has been giving joy of permanent and temporary displays to inhabitants and guests of the capital for three years now. By present, it has already unveiled for city dwellers 432 pieces of art by various artists and hosted 415,000 visitors. Among the gallery’s permanent display of works in the printed graphics halls one can see originals of lithographs of such globally known geniuses as Picasso, Chagall and even Dali. And temporary displays are renewed every 2-3 months: ForteBank Kulanshi ArtSpace exhibits both talented Kazakhstani artists and foreign ones.

Decision on whose pieces of work will be exhibited in the gallery is made by the Kulanshi international curatorial board. This is a public association of art experts, artists, designers, curators, archeologists and historians from Kazakhstan, Austria, Portugal, Poland, China and Belarus, who have an extensive experience and standing in the international art market. When a bid is received, the curatorial board looks in the first instance at the quality of a project. Artists, collections or creative groups do not obligatory have to be known in wide circles, as the essence of the gallery’s work is to maintain a high level of quality of the presented projects and to discover new names. According to the Kulanshi representatives, at the very beginning of the way Bulat Utemuratov has outlined such targets as: to develop the visual arts of Kazakhstan and to popularise the intelligent consumption of art products in the society.

“We have a lot of the arts, but there is no culture of art products consumption. Sometimes people do not understand that the arts are created for them to see, to consume and to use. Ask any person in your office: “How many paintings do you have at home?” Original paintings, not reproductions or posters. It will turn out that there is one or two, or neither at all. We have nomadic mentality, but we have been living the settled life for a long while now and already must accumulate not only material things which we can demise, but also moral and spiritual ones. For example, to have an original of a piece of work by a modern artist means that your grandson will own a painting by the artist who was popular and the value of this painting will increase a lot”, says Leila Makhat.

The Bank itself believes that the concept of having the gallery in its head office supremely well describes the main principles of one of the largest financial institutions of the country. The project combines support of talented youth, interest in development of the country’s educational system and active participation in social processes. The ForteBank Kulanshi ArtSpace gallery is much more than sponsorship, it is the targeted long-term collaboration for development of the Kazakhstani society. That is exactly why the Bank plans to continue investing in development and preservation of the cultural heritage of the country.