Bulat Utemuratov’s Foundation has financed construction of 100 houses for multi-child low-income families as part of the “Balameken” project.

In 2019 the Kazakhstani society faced an urgent issue of assistance to multi-child families living in disadvantaged conditions. In response, the government developed a large-scale programme of support measures: easy-term loans, mortgage programmes, housing certificates and allowances in various regions of Kazakhstan.

“Balameken”: houses for residents of Kyzylorda

In March Bulat Utemuratov’s Foundation announced the “Balameken” project which resulted in the construction, in cooperation with the Kyzylorda Oblast Administration, of houses for 100 Kzylorda low-income families. The project gained a special attention of the government of Kazakhstan as an example of an efficient format of interaction between business and representatives of the regional administration.

Houses were built in a new microdistrict “Baiterek”, and the general contributions of Bulat Utemuratov’s Foundation to the project comprised over 1 million US dollars.

“The project was implemented within the record terms, for a month and a half, and we are happy that summer vacations of 100 Kzylorda families start from house-warming”, – said in his speech Almaz Sharman, Chair of the Board of Trustees of Bulat Utemuratov’s Foundation, on the day when house keys were given to new owners on 31 May, right on the eve of the International Child Protection Day.

Beneficiaries of the project were selected by the special commission formed by the Oblast Administration. These were families living in the ill-suited conditions – renting temporal huts, garages and barns, forced to squeeze together into small, poorly heated and uncomfortable premises.

“Thanks to the “Balameken” project, we now have our own house. I have two children who are second-degree disabled. Earlier, we had no facilities to take care of them, now I hope our difficulties are behind. We have waited long years for this day to come”, – told mother of nine Nurgul Zhanabayeva. The woman has been on the housing waiting list for six years.

Each of the fifty duplexes is designed for two families, each family has its own entrance and six acres of land. The houses were commissioned in fine finish, with bathroom fixtures, a gas boiler and a stove. In addition, gas, water and electricity supplies were connected.  Bulat Utemuratov’s Foundation and the Oblast Administration made sure that the little newcomers had everything for a comfortable, and most importantly, safe life. 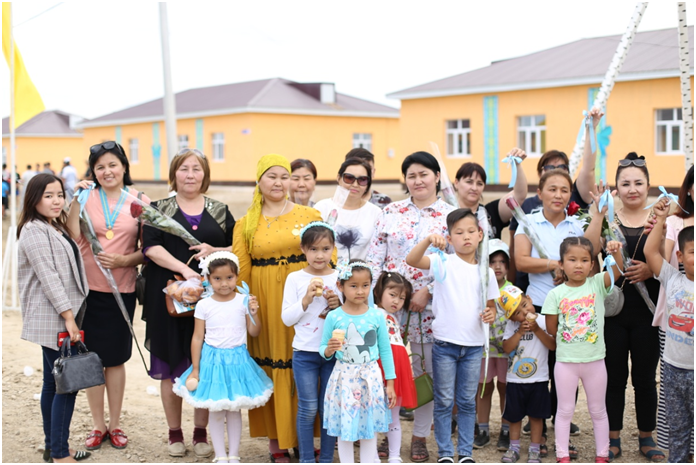