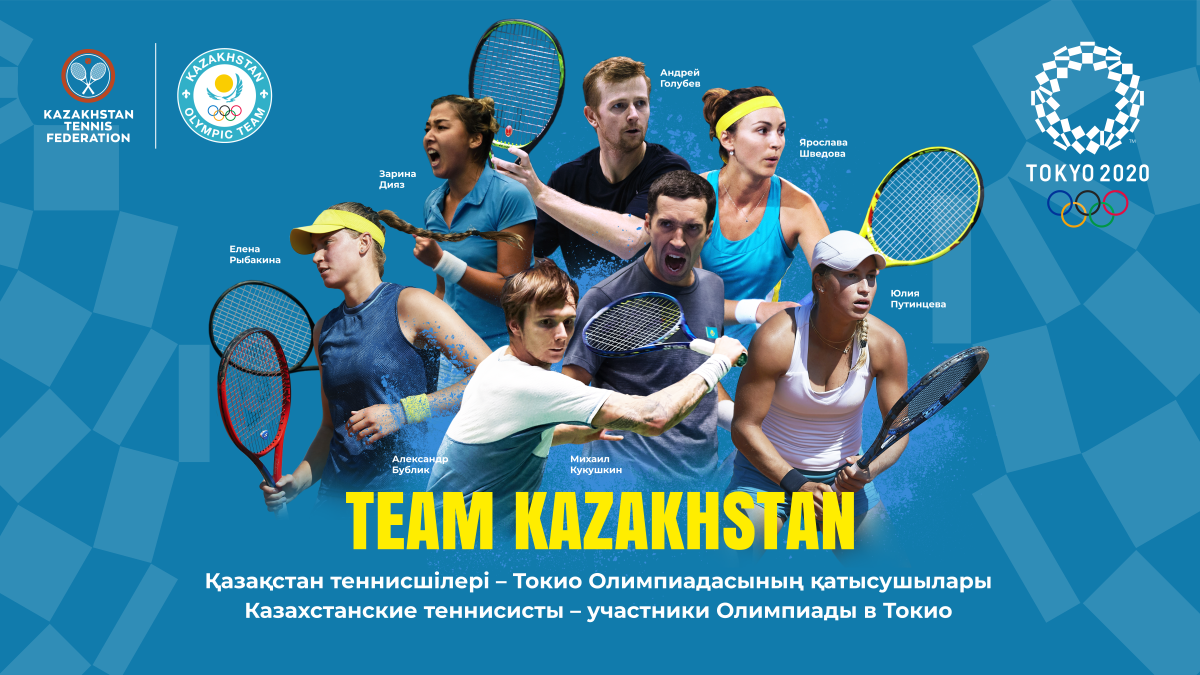 It’s for the first time that Kazakhstani tennis players won a record-breaking number of licences, and Elena Rybakina made it through to the semi-final of the world games.

The Olympic Games in Tokyo were held from 23 July to 8 August. Kazakhstan won eight bronze medals. Some believe that the performance of our athletes was a failure, but is this true? Let’s look into this using the example of tennis players.

It is not enough to win just one championship to get through to the Olympic Games. Tennis players had to win tournament after tournament during a year and make it to the ATP and WTA ratings.

“Eight licences is an achievement,” explains the captain of the men’s team of Kazakhstan, Yury Shchukin. “This proves that the Kazakhstan Tennis Federation, for the last 14 years headed by Bulat Utemuratov, is moving in the right direction, and our players have been improving their ratings for the last several years and therefore managed to take part in the Olympics.

Game with the world number two and deciding balls in the last minutes: how the men’s team performed

Alexander Bublik took part in the men’s singles tournament. Great hopes for reaching the final were pinned on the first racket of Kazakhstan, but in the very first round Bublik met with the strongest player of modern times.

“Alexander was unlucky with the tournament draw,” makes no doubt Yury Shchukin. “Still, playing with the world number two (Daniil Medvedev, Russia) right away in the first round, I think, would be difficult for anyone. Bublik lost in a strong fight.

In doubles, Alexander Bublik and Andrey Golubev also played against strong Frenchmen – Jeremy Chardy and Gael Monfils. The first set was retained by the Kazakhstanis – 7:6, the outcome of the second game was decided by a tie-break – 7:6 in favor of the French, and the decisive third set ended with the victory of Chardy and Monfils with a score of 10:7.

Mikhail Kukushkin defeated the 62nd racket of the planet – Argentinean Federico Coria at the start of the competition, but lost to Ilya Ivashka (Belarus) in the second round.

“Our players gave their best one hundred percent,” says the head of the men’s team. “It happens so in tennis: even if you are in shape, you cannot guarantee results and medals. Especially as the Games were attended by strong players – the leaders of the world ranking. It all depends not only on how you prepared, but also on the seeding – who you will play with in the first round.

Injury, hot weather and Rybakina’s game in the semifinals: how the women’s team performed

The women’s team was also out of luck. Zarina Diyas suffered a leg injury at the previous tournament, which is why she did not complete the game in the first round with Czech Barbora Krejcikova.

Yaroslava Shvedova and Yuliya Putintseva received sunstrokes in the hot capital of Japan, which is why they ended the matches early.

Elena Rybakina, the debutante of the Games, had to save the honor of the Kazakhstani women’s tennis. The young athlete, who is the 20th in the world ranking, reached the semifinals. In the first round, the Kazakhstani downed the ex-fourth racket of the world from Australia, Samantha Stosur, in two sets.

In the second round, the Kazakhstani also won easily in the match with the first racket of Sweden, Rebecca Peterson. In the 1/8 finals Elena Rybakina defeated Donna Vekic from Croatia in two games. To reach the semifinals of the Olympics, our athlete played against the ninth racket of the world, Spanish Garbine Muguruza, having won the match. So, Rybakina, for the first time in the history of Kazakhstani tennis, reached the semifinals of the Olympics in singles.

“I am insanely glad to go to the semifinals,” Elena Rybakina said on the eve of the game. “Thanks to the Kazakhstan Tennis Federation and the KTF President, Bulat Utemuratov, for their help and support. It’s nice when the whole Kazakhstan supports you.

However, in the semifinals, the Kazakhstani lost to the 12th racket of the world, Belinda Bencic from Switzerland.

“The problem was not in the third set, but in the first one, in which I was leading,” commented Elena Rybakina after the game. “I lacked just a little bit. As a result, it was physically difficult to tune in to a tie-break after leading the score. I play fast, and for me the longer a match lasts, the harder it is to get back into the game.

Competing for the bronze, Elena Rybakina lost the match to Ukrainian Elina Svitolina – number six in the world ranking.

“I tried to do everything in my power,” said Elena Rybakina, completing her performance at the Olympics. “Thanks to everyone who worried about me! I am grateful for your support! I hope I can take part in the Olympic Games in Paris, the situation with the pandemic in the world will improve then, and we will be able to feel support and hear the shouts of fans from the stands.

“The performance of Elena Rybakina, who reached the semifinals and fought for medals, is a historic event,” the Vice-President of the Kazakhstan Tennis Federation, Yury Polskiy, commented on the performance of Kazakhstani players. “There was a difficult situation with the coronavirus, when players could not travel to tournaments, train normally. This is sports, this is the Olympics, where results are unpredictable. The main thing is that the guys are in good health. We will be preparing for the next Olympic Games”.