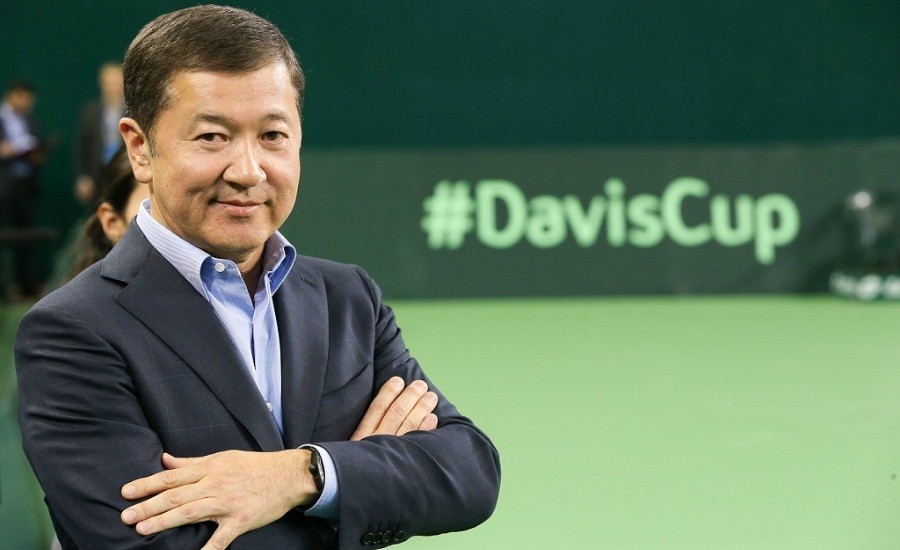 Over the past ten years, since prominent businessman and public figure Bulat Utemuratov has become the President of the Kazakhstan Tennis Federation, modern tennis centres have been built in every oblast centre of Kazakhstan. The Federation holds tournaments of national and international level, where our young athletes show good results. Kazakhstani tennis gets publicity abroad too. How was all this achieved? Steady work and dedication, high professionalism, patriotism, honesty and openness, as well as an emphasis on the maximum effectiveness are the main principles of the Kazakhstan Tennis Federation, which helped Bulat Utemuratov’s team to achieve tangible results in the development of both children’s and “adult” sports. But first things first. More than six thousand children are currently engaged in court tennis in Kazakhstan. It is necessary to create conditions for their professional growth and development, and ten years ago there were only sixty tennis courts in the country. Today’s figure is one hundred and eighty four. Every large oblast centre now has own professional coaches, but the Federation spares no cadre and sends experienced senior coaches to the oblast tennis centres.

KTF is a team of true tennis fans who support not only young men and women who will represent the interests of the Republic on the world stage in a few years, but also professional athletes. So, most recently, Kazakhstani tennis players defeated Switzerland and for the fifth time in history went to the quarterfinals of the Davis Cup World Group. Court tennis is a large-scale and, as a consequence, costly sport. Infrastructure is needed, strong coaching staff is needed and, among other things, athletes should be able to regularly participate in tournaments not only in Kazakhstan, but also on the world arena. The main goal of the Kazakhstan’s Federation, as of a public association of the republican scale, is precisely in this – popularising tennis and bringing the country to a qualitatively new level. This is what the Vice-President of the Kazakhstan Tennis Federation, Dias Doskarayev, thinks.

“Education of champions, financing of competitions, training of Olympians is a priori the task of the Ministry of Culture and Sports and of the National Olympic Committee. But the Kazakhstan Tennis Federation has a special, large-scale approach. Here, its President Bulat Utemuratov took on himself a lot, from the construction of tennis centres to the education of champions and the development of top-class sports. Just the state support is not enough for a real breakthrough of tennis in Kazakhstan. The personal efforts of the President of the Kazakhstan Tennis Federation are helping to bring the country to a qualitatively new level in the world tennis hierarchy,” – says Doskarayev. “In 2017, we were able to increase the number of events and general financial investments in tennis by one and a half time, including at the expense of personal funds of the KTF President”. For today, it is 65 million dollars which Bulat Utemuratov has invested in the development of Kazakhstani tennis in the last ten years.

The development of children’s sports is one of the most important and priority tasks for the whole of Kazakhstan. And today we can already see the fruits of the tremendous efforts invested here by Bulat Utemuratov. The Team Kazakhstan project deserves special attention: it gives the chance for Kazakhstanis to gain a foothold among the best players. June 1, 2017 was exactly nine years since the launch of this specialised programme in Kazakhstan. Its participants are gifted children from various parts of our country. Team Kazakhstan is a unique sports school created to form the own tennis reserve of players in the national teams of the Davis Cup and the Federation Cup. The academy selects the strongest juniors from all regions of Kazakhstan under the age of 16 and falls under the KTF’s full financial support, that includes trainings with the best coaches of Kazakhstan and invited foreign experts, meals and accommodation at the Tennis Team Hotel, specially built for the academy, trips to national and international competitions.

It also gives the opportunity to improve their skills on the basis of the world’s leading academies: in the Tennis Academy of Rafael Nadal in Spain, of Eric Van Harpen in Germany, in the International Tennis Academy of Chris Evert and Nick Bollettieri in America and in others. Students of the Academy won in total over 80 international tournaments, including various Grand Prixes. In 2017, the Kazakhstan national team playing in the category “under 12 years” became the champion of Central Asia. Kazakhstani tennis player Gozal Aynitdinova is the champion of Asia in the category “under 14 years”. Representatives of Kazakhstan’s tennis youth regularly take prizes in Europe. Kazakhstani Dostanbek Tashbulatov won a series of tournaments in Germany and France and also reached the final of the Orange Bowl International Championship in the USA. Last year, for the first time, ITF and ATF jointly organised the Asian team championship among children under 12 years old, where tennis players from 14 Asian countries took part. Children get opportunities for growth and development, and the country – a reason to be proud.

“I have two children engaged in tennis: Rodion started at 6, and Kira – at 7, as soon as the tennis centre opened in Kokshetau”, – shares Sergey Traigel from Kokshetau in his interview to Zakon.kz. “I started training too. Dias Doskarayev opened our eyes to the advantages of this sport. Speaking at the opening of the centre, he told us not only about tennis but also about development of individual and intellectual qualities of a child through this game. My daughter immediately said: “Daddy, I fell in love with tennis!” Now they started participating in the Republican tournaments of the Masters series. And Rodion made it to the list of the best players of the country in his age category and played in the “BALAM PODROS” tournament for the 10th anniversary of the Federation. We were happy and are proud of his achievements. It is nice that children are given such an opportunity to show their worth, he felt like a true professional”.