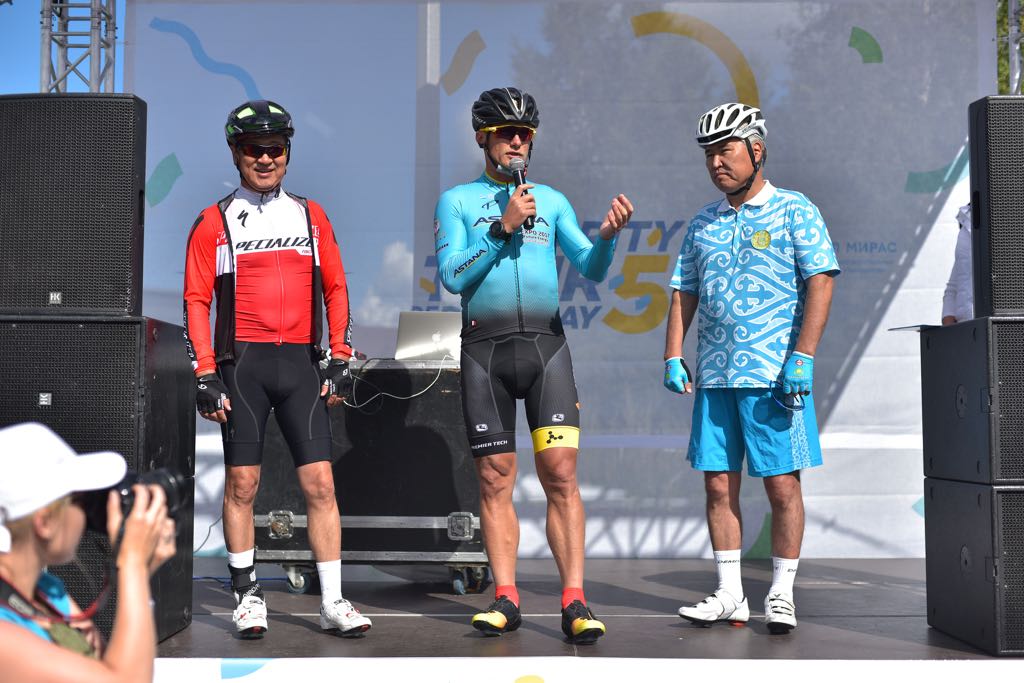 The charity cycling ride Burabike has turned 5 years. We are telling the success story of the action which annually rallies people in “Kazakhstani Switzerland”.

The Burabike charity bike ride is inspired by businessman and philanthropist Bulat Utemuratov. The philanthropist has been the patron of the project for six years now with a purpose of providing children’s medical institutions with equipment which is vitally important for children’s health. Besides, the project is aimed at popularisation of the culture of charity, ecotourism and healthy lifestyle.

How did it all begin?

The charity bike ride has been run from 2013. The purpose of the first action was charity collection to help newborn babies in the Akmola Oblast. The initiative was joined by the “Ayala” Charity Foundation. Alexander Vinokurov, the Olympic champion of 2012, also took part in the bike ride. Since then, he has been supporting the action every year.

“This is a noble calling, so many participants who can cycle together – from businessmen to ordinary people. It is a good event, especially as it is held in such a picturesque place as Burabay,” – the athlete noted.

The first charity bike ride in Borovoye has raised 11.5 million tenge. The money was used to equip the intensive care unit in the perinatal centre of Kokshetau.

In 2014, the project got a permanent social partner – Bulat Utemuratov’s Foundation. The main goal of the Foundation is the development of children’s health care. The founder, businessman and public figure, the President of the Tennis Federation of Kazakhstan, Bulat Utemuratov believes that the interests of a child should be in the priority for the society development. The Foundation identifies three main areas of activity: health, culture and education – which have the greatest impact on the formation of a personality and the quality of life of a child, and hence – of a society.

“We are glad that this initiative annually attracts more and more like-minded people. Children are the future of Kazakhstan, therefore all our activities are aimed at educating and helping them”, – Director of the Foundation, Marat Aitmagambetov, commented.

What are the project achievements?

For five years, 463.5 million tenge were collected. All funds were donated to children’s hospitals, perinatal and rehabilitation centres, as well as to orphanages. Thanks to the action, medical institutions throughout Kazakhstan received the required technical, rehabilitation and medical equipment.

“Our intensive care unit received some unique and very expensive equipment, the money for which was collected by the very participants of the bike ride. The equipment purchased thanks to bicycle rides helped save the lives of more than 70 newborns. The organisers approached us again to offer help. We indeed need more equipment for the pediatric building. When we will have received it, the centre will be able to accommodate patients even from the most remote corners of the Akmola Oblast,” says Natalia Tsyplakova, Deputy Chief Doctor for Childhood, Akmola Oblast Perinatal Centre.

Bulat Utemuratov’s Foundation donated the required medical equipment for newborn babies of the Kzylorda Oblast. The oblast perinatal centre was given two Atom Transcapsule V-808 transport incubators for the amount of 48,300,000 tenge. Humidicribs provide reliable protection of newborns, especially of premature babies, from the impact of the environment; create the necessary microenvironment for preserving life and further growth and development of a child during transportation to the hospital.

“The birth rate in the region has always been higher than the republican average (26.06 against 22.72 for the Republic of Kazakhstan), however, at the same time infant mortality remains quite high. For 7 months of 2016, 79 children needed urgent help from neonatologists. Out of them, 62 babies were transported to the oblast perinatal centre, 17 – were left in district hospitals of necessity and 10 of those died. The purchase of incubators will minimize the number of perished newborns,” – Akmaral Alnazarova, Head of the Public Health Department, Kyzylorda Oblast, emphasised.

In 2017, the bike ride gathered a record number of visitors – 1,500 people. 718 participants covered a 30-kilometer distance. There are no age restrictions for the event; the main thing is to be athletically fit.

Most of the proceeds are secured by an auction where in various years personal belongings of the world and Kazakhstani sports stars were exhibited: jerseys and bicycles of Alexander Vinokurov and Vincenzo Nibali, Gennady Golovkin’s gloves, Rafael Nadal’s racket, Fabio Aru’s super light bicycle, Olympic champion Dmitry Balandin’s T-shirt.

The total amount of donations collected at the Charity Tour de Burabay since 2013 has grown almost 14 times. The total revenue of the last auction was 102,900,000 tenge, the fair of children’s paintings collected 684,000 tenge, corporate and individual contributions exceeded 30,416,000, donations of philanthropists amounted to 26,000,000 tenge, the organisers told.

For the five years of its existence, thousands of Kazakhstanis participated in the bike ride, including eminent sportsmen, businessmen and state figures. For example, Olympic champion Alexander Vinokurov comes to Borovoye every year and covers the distances together with the Astana Pro Team. In 2014, the second charity bike ride was joined by the winner of the Tour de France 2014, Vincenzo Nibali. Participants included legend of the world weightlifting Ilya Ilyin, the President of the “Astana” Professional Sports Club, Olympic champion in cross-country skiing Vladimir Smirnov, Olympic champion Daniyar Yeleusinov, tennis player Galina Voskoboyeva, Vice-President of the Cycling Federation of Kazakhstan Raimbek Batalov, head of the Development Bank of Kazakhstan Bolat Zhamishev. The jubilee bike ride in 2017 was headed by the Minister of Culture and Sports of the Republic of Kazakhstan, Arystanbek Mukhamediuly, who has been taking part in the event since 2015.