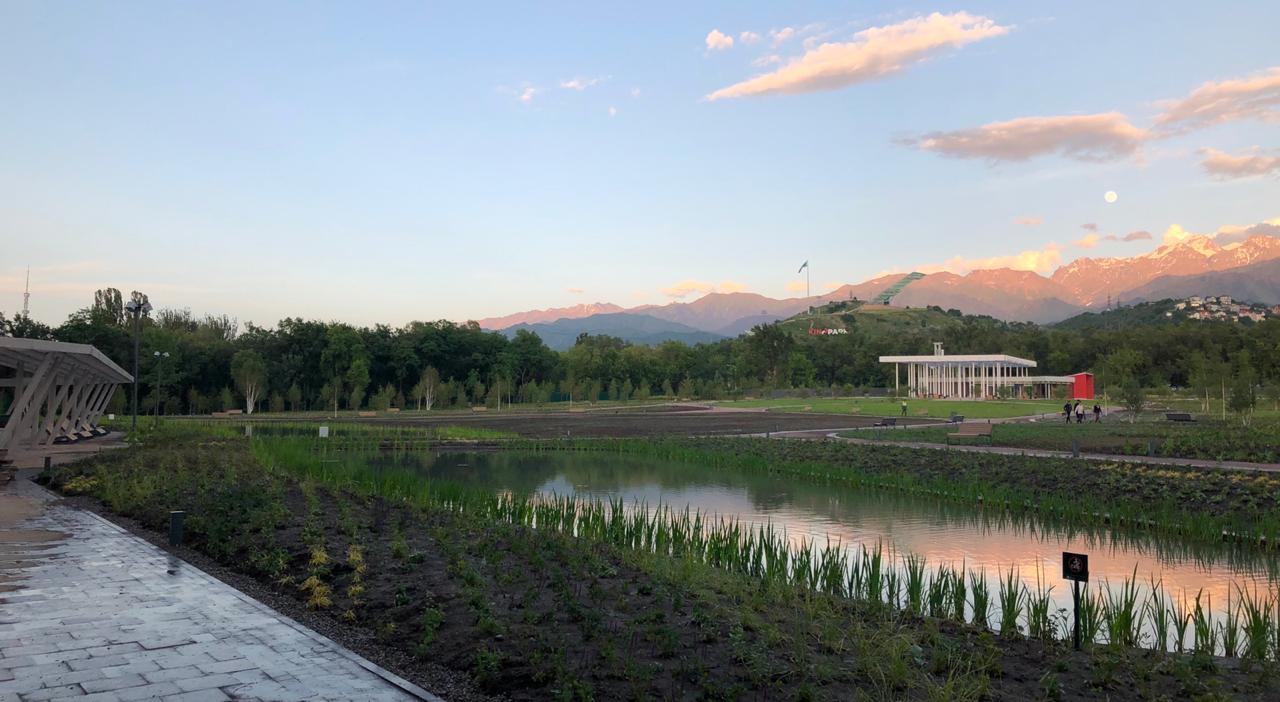 A large-scale reconstruction takes place in the Central Botanical Garden of Almaty for the first time in the recent half-century. The Foundation set up by businessman and philanthropist Bulat Utemuratov allocated 15 million dollars to renovate the green resources and to create a recreation area comfortable for the city inhabitants. New entrance pavilions, ponds with artesian water, fountains and even an amphitheater were built here.

Works started in May 2019 and were completed as soon as mid-June 2020. And on 12 May Bulat Utemuratov showed the Botanical Garden after its reconstruction to the President of Kazakhstan, Kassym-Zhomart Tokayev. This is the story of how that was and what was done within the scope of this large-scale work.

“This is our gift to Almaty, the garden will remain in the state ownership”

Exactly such key message was laid down in the reconstruction project which was launched in 2018 by Utemuratov’s Foundation at the request of the Institute of Botany and Phytointroduction. The main target is careful restoration of the Botanical Garden while preserving the integrity and unique features of its territory, modernisation of the infrastructure and multiplication of the green resources. “If a target is not put down on paper – that means it does not exist”, say engineers. That is why the best managers of the Verny Capital Group of Companies were invited to implement the project, and preparatory works with drawings and discussions in public hearings took a long stretch of time.

Kassym-Zhomart Tokayev visited the Central Botanical Garden within his working trip to Almaty. The President of Kazakhstan highly valued the private charity initiative implemented with direct participation of the public and the expert community.

“I think that the Akimat (city administration), jointly with Bulat Utemuratov’s Foundation, have done a big and, most significantly,  important work in this field. I call upon all inhabitants of Almaty to take care of this territory, to treat it like their own homes, and I believe that the Botanical Garden, like in previous days, will be one of the most favourite places to visit for them. So I wish you every success”, said Kassym-Zhomart Tokayev.

Founder of the charity foundation Bulat Utemuratov expressed his gratitude to the Head of State for his attention and high appraisal.

“We had the most responsible approach to the implementation of this project so that not only to preserve the green resources of the garden, but to multiply them enriching with new collections. Careful restoration and use of advanced technologies is the two major principles which we were guided by. We have put our souls and hearts in this project, we have done everything possible so that the renewed Botanical Garden would be liked by the Almaty inhabitants. This is our gift to the city, presented free of charge – the garden should remain in the state ownership and continue its scientific activity”, said Bulat Utemuratov.

The concept and the master plan of reconstruction were presented to the community at the public hearings in summer 2018.  Taking into account the special status of the Botanical Garden and the high public interest to the reconstruction project, Bulat Utemuratov’s Foundation from the very beginning provided its full openness and transparency. With the consideration of recommendations and wishes, a schematic design of the reconstruction was presented the same autumn. For the entire period of implementation, four press tours involving mass media, public and ecological activists were held. And then followed the start of construction works, supervision by the public control group and large-scale construction.

And now about the work done in figures. Three new entrance pavilions with an electronic ticketing system were built in the garden over the year. 174.3 thousand plants were planted, of which more than 1300 trees, 40 thousand bushes, 130 thousand cereals and perennials, 3 thousand roses. The water supply system was restored and drip irrigation and auto irrigation systems were created – now the green resources receive 2,760 additional cubic metres of water per day. The areas of public zones of the Botanical Garden were ennobled and expanded to 27.7 hectares, 50 thousand square metres of roads and paths were repaired, along which lighting systems (1,500 lamps) and video surveillance systems (130 cameras) were installed, garden furniture (250 benches) was renovated. In the northern parterre, the road surface was replaced with natural stone, a “dry” fountain and a reservoir with aquatic plants were created. The southern parterre was created at the site of the wasteland, with three ponds, a pergola, a field of wild grasses and alleys of maple, linden, birch and pine. A mobile application with the garden map and a description of the green resources has been developed.

A special attention was paid to accessibility of all zones of the Botanical Garden for low-mobility groups: user-friendly ramps for wheel-chairs were built, tactile paths were laid down.

By the way, ponds in the Botanical Garden were abandoned for over 30 years. As a part of reconstruction, the reservoirs were restored and three new ponds with artesian water were built. Currently the reconstruction of the Almaty Botanical Garden is about to be completed. At present, works are continuing on construction of paths in the Southern parterre and of the car access road to the Southern entrance pavilion via the adjacent territory, as well as on planting vegetation and installation of garden furniture.

“This is a charity project where we adhered to three main principles. First – considerate attitude to the garden plants, preservation and enrichment of the flora in close consultation with dendrologists and scientists of the Institute of Botany and Phytointroduction. Second – use of the best world experience and advanced expertise in design, architecture and planning of the infrastructure of the specially protected natural areas, use of eco-friendly, high quality materials for creation of comfortable and safe public space. Third – transparency and accountability, including public hearings and regular dialogue with active inhabitants of the city and ecological organisations on the plans of reconstruction works, inter alia via social networks”, told Marat Aitmagambetov, Director of Bulat Utemuratov’s Foundation.

Now the Botanical Garden looks like a modern, comfortable and eco-friendly public space. Visitors can enter the garden from Timiryazeva Street, from the Atakent Exhibition Centre, and from Al-Farabi Avenue.