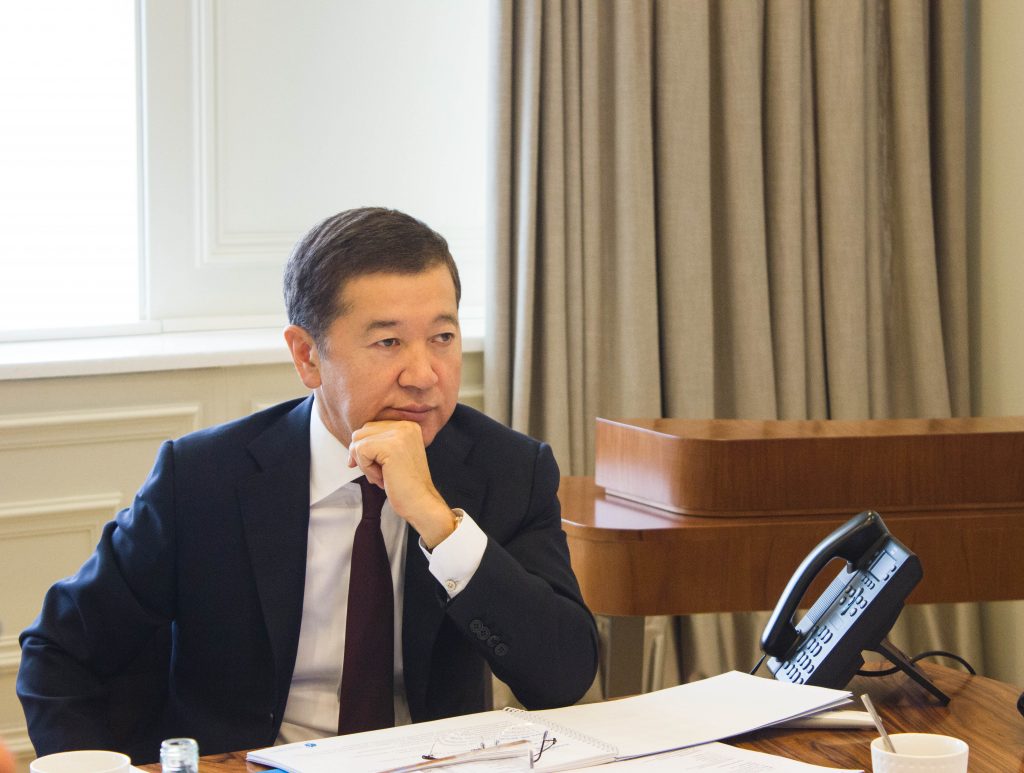 Bulat Utemuratov, a graduate of the Economics Department of the Almaty Institute of National Economy (today, Narxoz University), began his career against the backdrop of a difficult economic environment, as Kazakhstan’s leadership tackled serious challenges following independence, ranging from the unavailability of hard currency and the absence of a proper banking system to declining industry, as well as lack of legislative and new cadre base. At the time, he was rapidly moving up the career ladder, from lecturer at his alma mater to department head at the Ministry of Foreign Economic Relations. A pivotal point in his career came with the government opening the Kazakhstan Trading House in Austria.

Bulat Utemuratov’s diplomatic experience was a tremendous asset during two crises in the 2000s. In November 2004, then-President Nursultan Nazarbayev set up the National Commission for Democracy and Civil Society, which Mr Utemuratov headed, to help foster dialogue between the government and the opposition, and to promote democratic processes in the country.

Subsequently, Bulat Utemuratov served as Special Envoy of the President of the Republic of Kazakhstan to Kyrgyzstan.

In mid-1990s, Bulat Utemuratov, jointly with the Dutch company Mees Person, set up Almatinsky Trade and Finance Bank CJSC, one of the first banks in the newly independent Kazakhstan. It grew into a strong multi-product inter-regional group and, in 2007, was sold to the Italian group UniCredit for US$ 2.2 billion, at the time the biggest transaction in the CIS’s banking sector.

The entrepreneur used the proceeds from the sale to develop his asset portfolio, becoming the key investor in projects under management of Verny Capital investment company. Today, Verny Capital is one of the largest groups in Kazakhstan specialising in direct investment. The group’s portfolio of projects includes assets that work in the sectors of transport and logistics, real estate, hospitality, telecommunications, finance, and natural resources.

As a leading group in Kazakhstan, all of Verny Capital’s projects undertaken with international partners are distinguished by transparency and high standards of corporate management.

The Foundation’s first major project was the establishment of autism centres in major cities across Kazakhstan where families having children with autistic spectrum disorder can get professional assistance and support. Today, around 74% of children with autistic spectrum disorders are covered by the centres’ programmes and this figure will only increase.

Additionally, the philanthropist allocated one US$ 1 million for opening a rehabilitation centre for children with cerebral palsy in Almaty.

In 2020, the Bulat Utemuratov Foundation purchased two high-tech modular PCR screening laboratories for a total of US$ 4 million, donating them to the Almaty and Nur-Sultan Akimats (municipal governments). In addition, the Foundation purchased 94,000 coronavirus rapid tests.

In 2019, as part of the Balameken Project, the Foundation allocated US$ 3.4 million for construction of housing for 100 multi-child and low-income families in Kyzylorda, and for 100 families affected by the man-made disaster in Arys. In May 2020, Bulat Utemuratov allocated US$ 6 million to build 150 houses for the flood victims in Maktaaral district of the Turkestan region.  Since 2018, the Foundation together with the Red Crescent of Kazakhstan helped more than 13 thousand Kazakhstanis affected by spring floods, providing for a total of over US$ 1 million in aid.

The Foundation provided assistance in the aftermath of the 2021 drought in the Kyzylorda region, including efforts such as drilling new water wells to preserve livestock and to water the pastures in the region, cleaning canals and repairing spillway structures, as well as acquiring new agricultural machinery and feed.

The Foundation is also active in supporting urban development. In 2020, it completed the large-scale reconstruction of the Almaty Botanical Garden , a crucial public space in the city. The cost of this project was US$ 15 million.

In 2022, the Foundation presented a project for a new passenger terminal at Korkyt Ata airport in Kyzylorda. The two-story terminal with stained glass facades made of tempered glass will cover an area of 7,500 square meters. Construction is expected to start in February 2023, with the new terminal welcoming its first passengers in September 2024.

Beyond his work through the Foundation, Bulat Utemuratov is also directly involved in a number of education projects. He has been funding the development and reformation of his alma mater, Narxoz University over the long term. In June 2022 Verny Capital announced the opening of the newly renovated campus at Narxoz University.  The reconstruction of the university’s main academic building, with a total area of 30,000 square metres, was completed in a record 11 months.

Sustainability is one of the key indicators of the reconstruction project – modern environmentally friendly technologies, materials and equipment were used in the construction of the campus. More than 30,000 trees and other plants were introduced throughout the university in order to improve the energy efficiency of the new campus.

Mr Utemuratov also supports the British Haileybury Schools in Almaty and Nur-Sultan, which pioneered an innovative education approach in Kazakhstan.

Both the University and the schools are non-commercial institutions, and the proceeds from their activities are spent on fostering young talent, infrastructure upgrade and improvement to the education process.

In 2022, the Bulat Utemuratov Foundation announced the construction of a new school for 1,500 students in the town of Kosshy in the Akmola region. The total cost of the project is more than US$ 15 million.

One of Mr Utemuratov’s major priorities is popularising the sport in Kazakhstan. To date, he has invested over US$ 85 million in the development of sport, with funds directed towards launching tennis training programmes for children, establishing the Team Kazakhstan Academy and forming national teams. The Federation’s tennis centres operate in all of Kazakhstan’s major urban centres.

As a result, tennis lessons are much more affordable today than previously, with a month’s worth of lessons costing ordinary Kazakhstanis as little as one hour of lessons had cost two decades ago. Meanwhile, all the Federation’s tennis centres’ earnings are reinvested in their development. These efforts have been very productive as currently both the men’s and women’s national tennis teams of Kazakhstan stand among the top 20 national teams globally, while the sport is more popular in the country than ever before. More recently, Kazakhstan’s Elena Rybakina won her first Wimbledon title. As head of the Kazakhstan Tennis Federation, Mr Utemuratov was closely involved in the organisation of a major milestone event in global tennis, the charity match of Novak Jokovic and Rafael Nadal in Nur-Sultan in October 2019. In October 2020, Nur-Sultan hosted ATP 250 Astana Open international tournament, the first such to be held in Kazakhstan. Despite coronavirus restrictions, the event was organised to a high level, with the Kazakhstan Tennis Federation being lauded by tournament organisers for ensuring excellent conditions for the event. As a result, Nur-Sultan received another single-year license for ATP 250 in 2021. The ATP 500 tournament will be held in Nur-Sultan in October 2022.

Bulat Utemuratov is the chair of the Council of Trustees of the Foundation for Development and Support of Ballet and National Dance, he also supports the Batyrkhan Shukenov Foundation. Regular exhibitions of the Kulanshi Centre of Modern Fine Arts take place under Mr Utemuratov’s patronage in the Forte Bank Kulanshi Art Space.